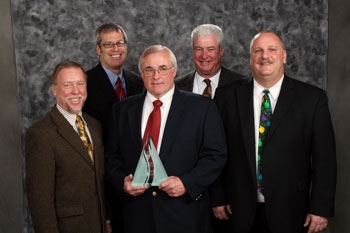 The Regional Project recognizes a project that has made a significant contribution to the region in transportation, land use and or air quality. The 2007 SACOG Salutes! Regional Project of the Year is the California Department of Transportation (Caltrans) Division of Rail Voluntary Diesel Retrofit and Automatic Engine Shutdown System on passenger trains.

In May of 2004, the United States Environmental Protection Agency (USEPA) issued a Request for Applications (RFA) for a “Voluntary Diesel Retrofit Program Technology Demonstration Assistance Agreements to Benefit Sensitive Populations.” In November of 2004, the Sacramento Metropolitan Air Quality Management District (SMAQMD) was awarded a $150,000 grant from the USEPA to fund a demonstration program to fabricate and install a Cleaire Longview® diesel retrofit system to reduce diesel particulate matter and Oxides of Nitrogen (NOx) on two head end power (HEP) units operated by Caltrans. The USEPA awarded the project to use the Cleaire Longview® because it was the only California Air Resources Board (CARB) verified and US EPA recognized emission control device able to achieve a Level 3 particulate matter (PM) reduction and also reduce NOx emissions.

From the RFA the Caltrans Division of Rail began the voluntary diesel retrofit program for passenger trains on the Capitol Corridor which service the areas between the Bay Area, Sacramento and San Joaquin. Caltrans recognized the significant emissions benefits that would be associated with changing how passenger cars are powered and introducing new lower emission engines while retrofitting existing diesel engines.

While working on the diesel retrofit, project planners also recognized that reduction of emissions with reengineering the HEP units which supplies additional power to the passenger cars. Caltrans worked to retrofit and install new HEP systems.

Project planners at Caltrans also worked to prevent unnecessary idling during overnight layovers by implementing an automatic engine shutdown system, all though this was not part of the original project. All of the modifications and upgrades Caltrans made were voluntary. Caltrans continues to work on programs to reduce emissions in the region through innovative, clean and safe technologies.