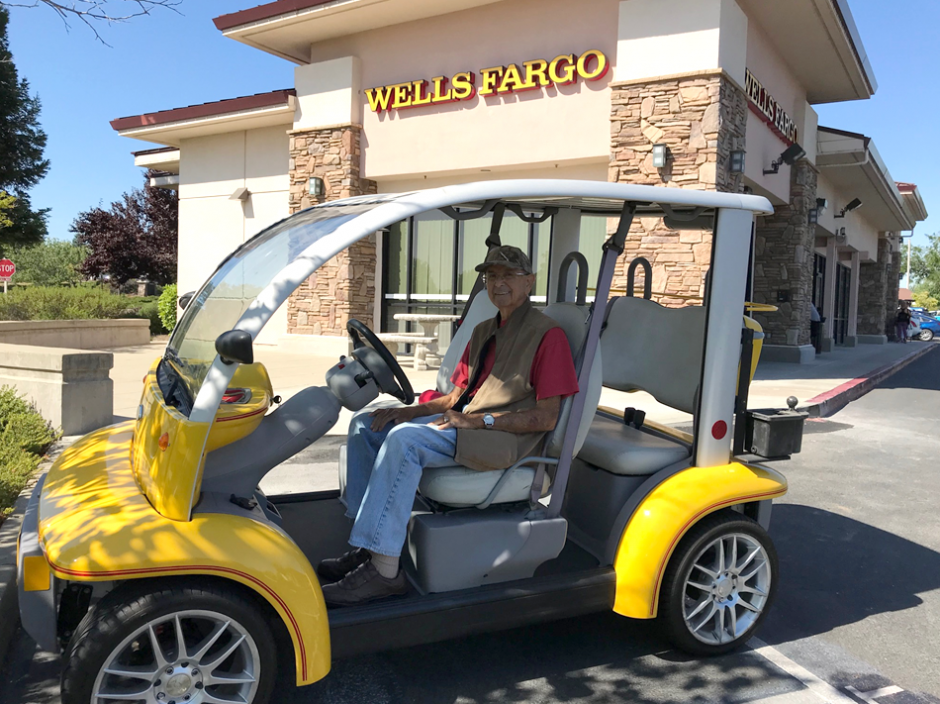 October 28, 2019: When you think about innovative mobility you might think autonomous vehicles, electric scooters, or maybe something more futuristic like flying cars. But innovative mobility doesn’t have to involve a high-tech device, it just needs to bring a new solution to an existing transportation challenge. That’s what City of Lincoln is doing with Neighborhood Electric Vehicles (NEVs). These convenient, affordable, zero-emission vehicles are used frequently by residents of Sun City Lincoln Hills and quickly gaining popularity in other parts of town.

To the casual observer, NEVs might look like golf carts, but they are small electric cars that meet federal safety standards for low speed vehicles meaning they include features like seatbelts, rearview mirrors, and signal lights.

The challenge for the City of Lincoln is that the vehicles can go only up to 25 mph, which means some roads are not safe for NEV use. However, with so many residents wanting to get around in NEVs, and the city wanting to embrace the benefits of better air quality and reduced car traffic, the city helped pass state legislation that gives the cities of Lincoln and Rocklin authority to create NEV transportation plans and allows NEVs to be used on roads with speed limits posted above 35 mph when there is a designated NEV lane.

The city hasn’t stopped there. Lincoln’s most recent innovative mobility win for NEVs came in the form of an exception from the California Department of Transportation (Caltrans) to fund two 8-foot shoulders for shared NEV/bike lanes as part of a bridge widening project. Caltrans initially thought that the NEV lanes were not necessary and was only willing to pay for 5-foot shoulders to accommodate bike lanes.

Roland Neufeld, City of Lincoln’s project manager for the McBean Park Drive bridge project, gave a presentation to Caltrans to appeal this decision, noting that the NEV/bike lanes were needed for accessibility and safety. Many residents were already using the bridge to get from Sun City to downtown Lincoln, even with logging trucks traveling well over the 35 mph limit. Why not embrace this environmentally-friendly mode of travel by providing a safer lane of travel? As a closing argument Neufeld stated, “you wouldn’t build a bridge in the City of Davis without bicycle lanes. Similarly, the City of Lincoln would be foolish to build a bridge without NEV lanes.”

Thanks to city staff’s compelling arguments, and Caltrans’ willingness to embrace this innovative mobility option, Lincoln won the appeal for exception, something that rarely happens.

“Our city has unique transportation challenges and opportunities given its high proportion of Neighborhood Electric Vehicles (NEVs) and their growing popularity,” said City of Lincoln Mayor, Paul Joiner. “I’m pleased the state was willing and able to be flexible and assist us in meeting the transportation needs of our community.”