Updated November 15, 2021: President Biden signed into law the first half of his domestic agenda, the bipartisan Infrastructure Investment and Jobs Act (IIJA) – a $1.2 trillion bill that increases funding for existing infrastructure such as highways, transit, and active transportation programs led by SACOG, as well as adding onetime funding and new programs that will benefit communities across the region. The bill had won bipartisan support and passage in the U.S. Senate in late August, and eventually won bipartisan support in the U.S. House last week. While this law will provide a much-anticipated influx of federal funding, Congress is also considering additional funding in the second half of President Biden’s “Build Back Better” agenda, a broader $1.75 trillion package to support climate, schools, housing, and other human infrastructure, but it is unclear when that package will move forward.

1. The bill represents a historic investment in infrastructure, including critical transportation funding

The $1.2 trillion Infrastructure Investment and Jobs Act funds a broad range of infrastructure, including transportation, over the next five years. This is the first time a bill of this magnitude has worked to comprehensively address infrastructure challenges facing the country as a whole. In addition to $550 billion in transportation investments, the bill allocates

There is also an allocation of $21 billion to clean up heavily polluted areas like Superfund and brownfield sites that disproportionally affect communities of color. 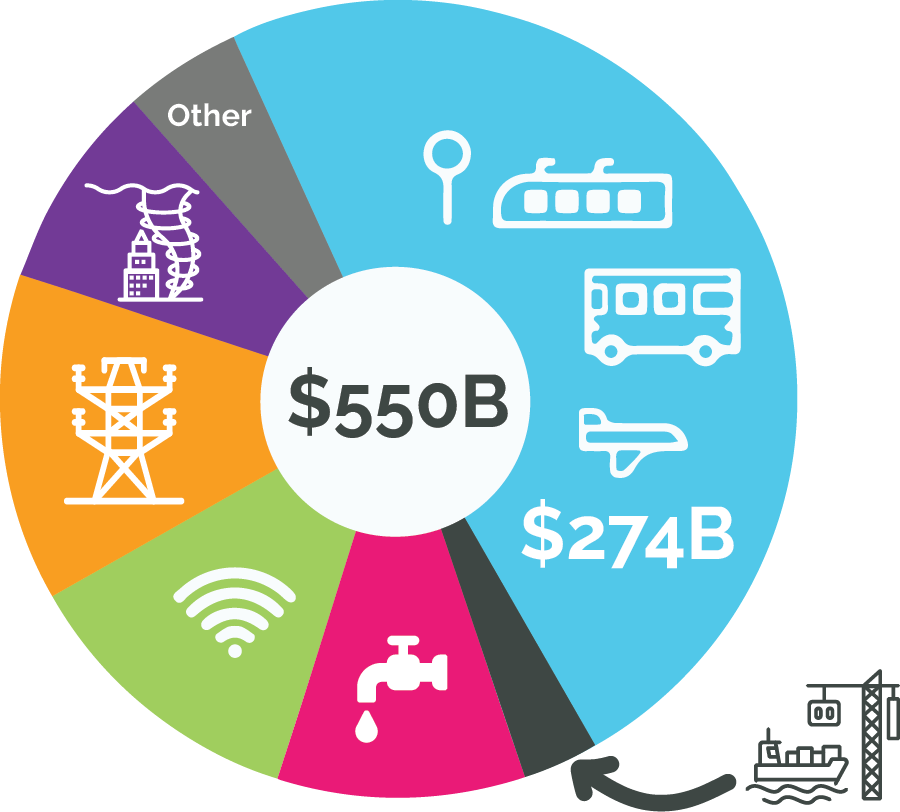 2. Includes a new five-year surface transportation authorization with more funding and some changes

The federal surface transportation law sets national policy and defines roles between states and regions in long-range planning and short-range funding. The IIJA is a mega-authorization bill. It continues existing funding for transportation that comes to states and regions ($293.4 billion) and adds $274.1 billion in new onetime spending over the next five years. One thing that is not in the bill, however, is earmarks for specific projects. Existing programs will continue to be part of the funding rounds conducted by SACOG and its regional partners at the El Dorado County Transportation Commission (EDCTC) and the Placer County Transportation Planning Agency (PCTPA).

While there are no earmarks in the IIJA, there is an unprecedented opportunity—more than $100 billion— for regions to receive more than their normal share of funding through competitive grant programs. Existing competitive grant programs for freight (ports and rail), highways, bridges, intercity rail, buses, streetcars, and light rail all receive significant increases.

This creates funding opportunities for projects like the neighborhood friendly Broadway Bridge providing a new connection from the City of West Sacramento to the City of Sacramento, or the capacity expanding Cap City Corridor project that will extend bus/carpool lanes and add a bike path on the American River Bridge, or street enhancements and expanded bike lanes in Galt. Funding could support projects that provide bike and pedestrian connections like the I-505 Overcrossing in Winters, or it could help replace regional transit light rail cars that have been in service for more than 30 years.

4.Big emphasis on climate and equity

Congress and the Biden administration have made it clear through IIJA and separate actions at the U.S. Department of Transportation that climate resiliency and equity are big priorities. Some specific requirements are written into the law, and the Department of Transportation has already released information about how they will be applying climate and equity criteria to competitive grants they make. U.S. DOT has addressed equity in recent Notice of Funding Opportunities (NOFOs) by giving priority consideration to applications that advance racial equity and address barriers to opportunity. For example, the Justice40 Initiative established by President Biden, and now being further developed by DOT, aims to ensure 40 percent of the overall benefit of federal investments in climate and sustainable transportation go to disadvantaged communities.

Congress created a significant new program in IIJA, the Carbon Reduction Program, funds from which will be distributed by formula to regions across the country. The program focuses on reducing transportation emissions by improving the capacity of existing roadways. Suggested strategies focus on traffic management such as toll lanes, electric vehicle charging infrastructure, and increasing alternative transportation and zero emission vehicles. It will take some time to set up this program, but it could be an opportunity to fund megaregion priority projects such as managed lanes on I-80 in Yolo County, and on I-5 in Sacramento County.

5.Big emphasis on passenger rail and boost to megaregion efforts

IIJA represents the largest investment in rail since Congress created Amtrak 50 years ago—equivalent to 18 years of typical funding for rail in a single bill. This includes $16 billion for Amtrak nationally, $12 billion for intercity passenger rail, $5 billion for Consolidated Rail Infrastructure and Safety Improvements (CRISI), and $3 billion for rail crossing elimination programs. This represents a significant opportunity to accelerate many of the Megaregion Dozen rail investments including increasing passenger rail service capacity on the Capitol Corridor from Sacramento to Roseville and Placer County. Another project that could benefit from this investment is the Valley Rail Program expansion completing the extension of the Altamont Corridor Express (ACE) and San Joaquins services into Sacramento with additional service to Marysville and Chico, and even thinking bigger about extending commuter rail to Lake Tahoe and into the Reno/Sparks area.

While significant funding is available, it is largely in the form of competitive grants. The Sacramento region will need to work together and be collaborative in approaching new and expanded funding opportunities. The U.S. Department of Transportation will be looking for projects that innovatively enhance a region, not just a single county, city, or neighborhood.

Watch now to learn how the $1.2 trillion in IIJA funding will be prioritized over the next five years: