SACOG ANNOUNCES NEW BOARD LEADERSHIP FOR 2019 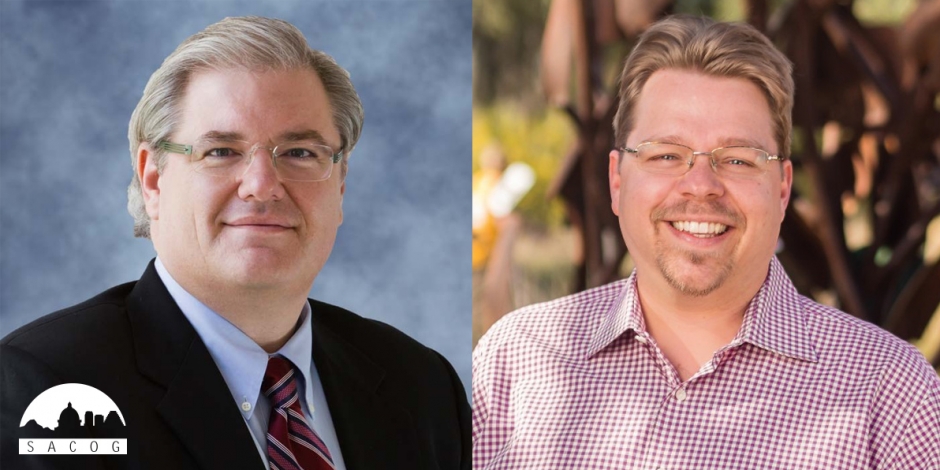 December 20, 2018: The Sacramento Area Council of Governments (SACOG) Board of Directors has elected City of Rancho Cordova’s vice mayor David M. Sander as the 2019 board chair and City of Davis councilmember Lucas Frerichs as board vice chair.

“I am happy to continue serving my community and the region in this new role as SACOG board chair,” said Chair Sander. “This is an exciting time for our region as we explore new transportation initiatives that will benefit and support the diverse lifestyles of our residents in suburban, urban, and rural areas. I am eager to help lead our board to think about the revitalization of our communities in a way that will help people access transit, bike share, and other mobility options in all parts of the region. It is SACOG’s regional collaboration that is going to ensure we are able to harness all the opportunity the region has to offer and continue to make this the best place to live, raise a family, or grow a business,” he said.

Chair Sander was elected to the first Rancho Cordova City Council when the city incorporated in 2003 and re-elected in 2004, 2008, and 2012.  He served as mayor in 2007, 2012, and 2016 and as vice mayor in 2006 and 2011. Sander has been active in many community, state, and national endeavors and was named the Sacramento region’s Elected Official of the Year in 2006. Some of his roles have included being a past board member of the Rancho Cordova Chamber of Commerce and a past chair and board member of Regional Transit and Paratransit.

He is the principal and founder of Sander and Associates, a scientific consulting/development firm that specializes in medical and scientific projects.

Vice Chair Frerichs has served on the Davis City Council since 2012 and on the SACOG board since 2014. Lucas is a leading regional voice for smart growth, multi-­modal transportation, public safety, economic development, and environmental sustainability. Lucas’ career of public service began as a long-­time staffer in the California State Legislature. With nearly 15 years of experience working in the halls of the State Capitol, Lucas currently works as Director of State Policy for The Nature Conservancy, where he is responsible for advocating on behalf of the environment before the California State Legislature and numerous state agencies.

“I’ve really attempted to dig in and contribute during my first four years on the SACOG board, and I’m thrilled to serve in my fifth year in the role of vice chair. The SACOG board is the place our region’s elected officials come together to work on a variety of issues from transportation, air quality, and natural resources to housing and regional economic competitiveness. I look forward to representing the city of Davis and the region on these vital issues,” said Frerichs.

Back
This item appears in:
This post has been archived and may contain content that is out of date.