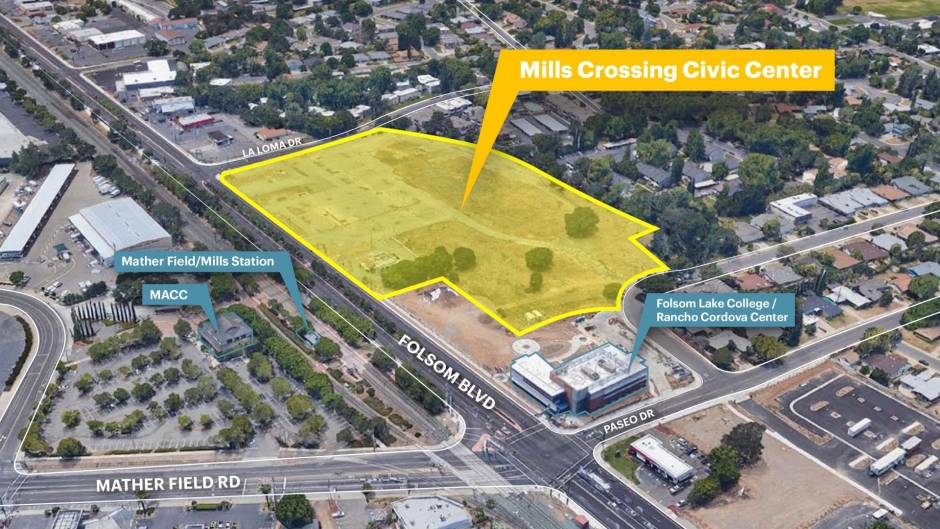 February 8, 2022: Progress is the name of the game in Rancho Cordova, where plans for the bustling 10-acre Mills Crossing project are moving forward. The city-owned lot, located next to a light rail station, is one of the best transit-oriented development opportunities within the city. It has the potential to be a magnet of activity for visitors and residents in a part of the region that is known for its large business centers and bedroom community.

“It’s really going to become a central gathering place for the community,” shared Stefan Heisler, housing manager for the City of Rancho Cordova. Heisler sees this as a place that people from around the region can come to enjoy. The site, located on a major thoroughfare where Mather Field Road and Folsom Boulevard meet, shares a block with Folsom Lake College across the street from the Mills Station Arts & Culture Center (MACC), and it’s surrounded by thousands of homes and residents.

“We need to show what’s possible here,” said Rancho Cordova Council Member and SACOG Board Member David Sander while addressing the item at a council meeting on December 6, 2021. During the meeting, council members voted to approve a general site plan for the project. Sander noted that Folsom Boulevard has been zoned for its former life as old Highway 50 and he believes it is time to show the community and private developers it’s possible to create a center of interest along the corridor. Now that a site plan is approved, the city will begin formal agreements and a more detailed development design to bring the new lot to life.

The approved plan includes up to 110 housing units, two acres of outdoor community space, and up to 120,000 square feet of commercial space expected to be filled by health and arts focused tenants. Imagine a park where neighbors gather for picnics and pickup soccer games, a plaza where visitors come for cultural festivals, and a performing arts center that community members visit time and time again to listen to their favorite local artists. It paints quite a different picture from the fenced-in barren concrete lot there today.

Nancy Bui-Thompson has lived in Rancho Cordova for 20 years; in fact, she worked on the campaign that helped incorporate Rancho Cordova into a city in 2002. Now she serves on the Sacramento Municipal Utility District (SMUD) Board of Directors as a representative of the area. She believes the Mills Crossing project will revolutionize that part of the city and increase the economic vitality and richness of the area. “It will be seen as the place to go, the place you want to shop and go to get medical care and services. It’s not what you think about it today at all,” she added. Bui-Thompson says having dense housing and services that people can easily walk to or access by transit is greatly needed in the city and she hopes that a close community like this one will help bring people together.

Mather Field/Mills light rail station is directly across the street from the site, and it’s the busiest light rail station in the city. Prioritizing development near transit like this one creates better access to regional amenities, reduces congestion, and creates a dynamic and vibrant neighborhood. Compact gathering spaces and housing are a perfect recipe for encountering neighbors during evening walks, planning uncomplicated coffee dates, and knowing where there is always something going on only a few blocks away. SACOG’s Regional Transit Oriented Development Toolkit, created in partnership with the Sacramento Regional Transit District (SacRT), highlights more examples of how local governments and communities can prioritize transit-oriented developments to make it possible to access community benefits without having to rely on cars.

The City of Rancho Cordova has done a lot of work to get up to this point. “It’s a long project, as you can imagine,” Heisler added. Visioning for the lot started back in 2018, and since then city staff have held public meetings, distributed surveys, and even organized a “Coffee with the Mayor” series last year so residents could go in person and ask Mayor Garrett Gatewood questions about the project.

Heisler believes this is going to make a lot of people happy. “There is going to be something for everyone.” The city plans for construction to begin in early 2023 and be completed by 2025.