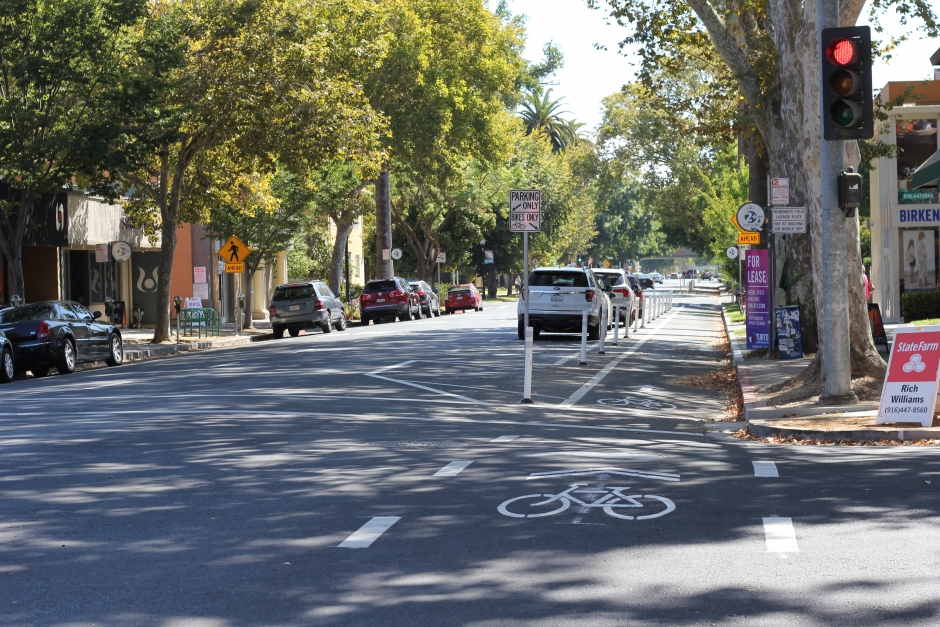 January 29, 2019: Cities and counties across the Sacramento region have been expanding transportation infrastructure with a multitude of trail and bike lane options. These additions helped to make travelling by bicycle a real option for more residents than ever. Read on for a sampling of bike infrastructure additions in urban, suburban, and rural parts of our region.

Yuba County tackled phase 1 of the North Beale Road complete street project that made travel easier and safer for bicyclists, pedestrians, and transit users. The improvements included storm drains, curbs, gutters, sidewalks, street landscaping and bike lanes, sidewalks, bike lanes, transit enhancements, and lighting. Construction on phase 2 is expected to start in 2020 and will continue the improvements to the entrance of the community college at Linda Avenue.

West Sacramento continued to connect its city center to the river by converting a narrow two-lane connection to one way for vehicles and a two-way cycle track that connects the city center to the Washington neighborhood. The Washington area also received new sidewalks, fresh green paint to help designate bicycle lanes and attractive stamped asphalt “brick” crosswalks to help residents and workers travel through town.

In downtown Sacramento, the City has been taking an opportunity to reshape streets that were due for resurfacing by including buffered and parking-protected bicycle lanes as part of the street re-striping. This approach has allowed them to leverage limited funding into 22 blocks of modern urban bikeways with an additional 25 blocks coming this year. The parking protected bike lane on J Street even nabbed an award from PeopleForBikes as the fourth best new bikeway in the nation in 2018.

Whereas most of Sacramento County is relatively flat, the City of Placerville and El Dorado County must contend with rolling foothills and valleys. With the completion of a segment of the Bob Smart Honorary Bridge trail, they were able to safely and conveniently connect the south side of Placerville with Missouri Flat Road over a canyon on a path parallel to US 50 over Weber Creek.