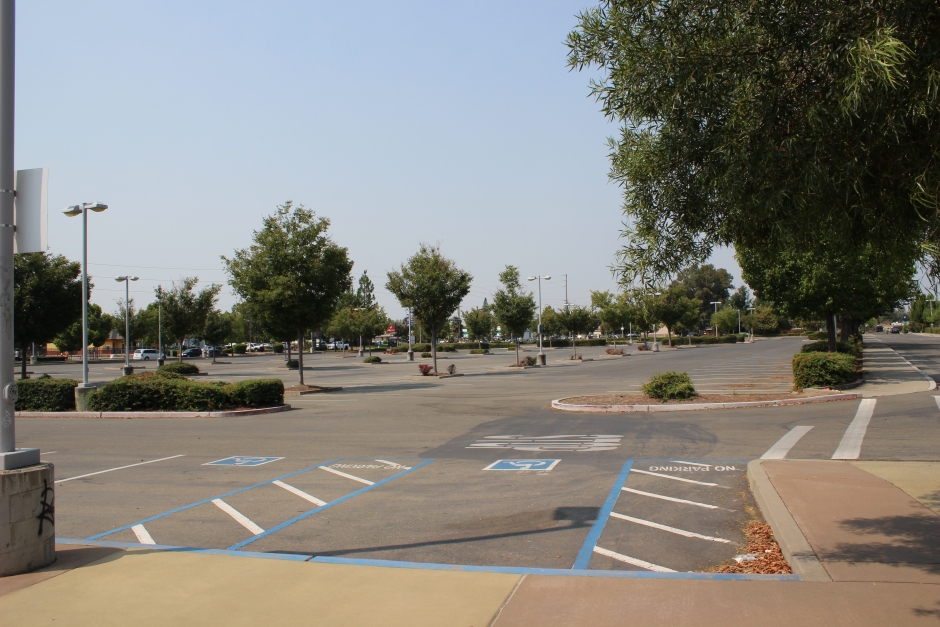 May 21, 2019: Train stations and the communities that surround them are interdependent so when the land uses around a train stop change, it can spell trouble for commuter rail.

That is what happened at Florin and Meadowview stations in South Sacramento, which were the final two stops on the line before SacRT’s light rail Blue Line was extended 4.3 miles south in 2015. That meant their large parking lots, which had been popular park-and-ride sites for light rail riders who lived south of the line, lost half of their passengers to the new southern-most stations of Cosumnes River College and Franklin.

The 20-acre Florin station and the 15-acre Meadowview station became severely under-used and the large vacant parking lots became emblematic of the declining fortunes of their surrounding areas — 1960s-80s commercial corridors where investment moved on, retail declined, and where residents fell behind on indicators such as income and educational attainment.

These large parking lots now represent an opportunity to help turn around their neighborhoods and to boost transit ridership using the tool of transit-oriented development. This is the idea that by having housing, retail, and job centers within walking distance of transit stops, a community can be revitalized, transit becomes more appealing, and car trips and their emissions decline.

The panel visited the four-square-mile study area over two days in September 2018, meeting with more than 75 city and county officials, local business leaders, and residents to create a plan for development that would not only bring housing to the transit stops but would also revitalize the surrounding communities with new retail spaces, parks, and community amenities.

Meeting with lots of residents and stakeholders was important because as the panel reported, many in the communities around the stations felt that “they are always being planned for instead of being included in the planning process”, as one panel member put it. “The underlying message from stakeholders is, ‘Do projects with us, not to us.’”

The proposed development would address some of the inequities of the South Sacramento neighborhoods. The project study area’s unemployment rate of 11.4 percent is almost three times the city’s 3.9 percent rate and the area’s median household income is just $35,000, compared to $62,000 for the city overall. The South Sacramento-Florin community is also one of 10 statewide that has been identified as disproportionately affected by air pollution.

The panel proposed mixed-use developments at both sites, along with 3-acre parks. At Florin station, the proposal calls for 920 units of multifamily housing in three-story buildings with 47,500 sq ft of retail/flex space, which could include a fresh-food market and a daycare center. The majority of the apartments would be affordable. At Meadowview, the proposal is for 540 units of housing, aimed at seniors who wanted to downsize in their community. This would help address the concern that development could bring gentrification pressure leading to residents being priced out of the neighborhood.

The proposals show the “importance of investing in the communities along the light rail lines” said Kacey Lizon, SACOG’s deputy executive director of planning and programs. The proposals would align with SACOG priorities of spurring infill investment and better use of transit infrastructure, she said.

SacRT’s transit oriented development [TOD] and real estate manager Traci Canfield agreed. She described the proposals as “potential catalyst projects” that could be replicated at other sites, and which would “hopefully spur developer interest for more TOD in the region at other stations.

She said one of the original goals of the large land purchases for stations was control over future TOD, which would also boost transit ridership. The ULI panel projected the two proposed developments would increase transit ridership by 1,460,000 rides annually.

Canfield said SacRT would soon be releasing a Request for Proposal for the Florin site, looking for partners who met their TOD criteria, using the ULI panel recommendations as a guide, and that they had several letters of interest for the site.

She said SacRT needed some key partners to make the vison for TOD development a reality: “Progressive developers willing to take a leap of faith on building TOD in the suburbs; city decision makers that will be flexible in allowing development to be built near stations that is transit-supportive and pedestrian-friendly rather than car-oriented; and neighbors that are interested in TOD.”