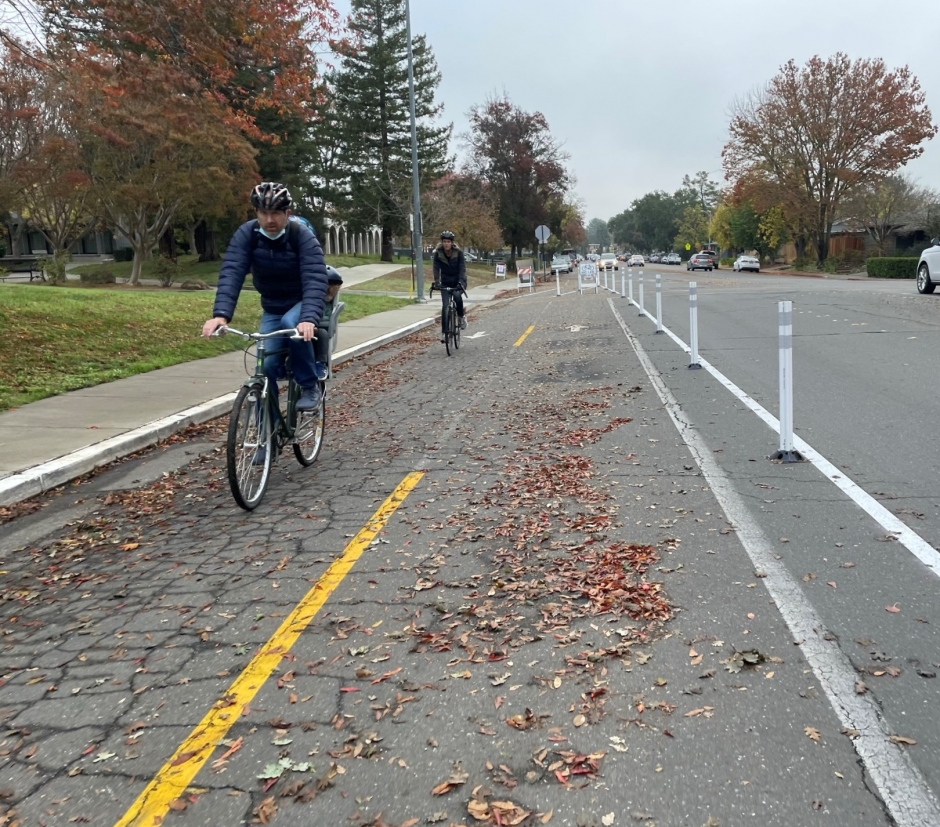 January 10, 2022: For a week in November 2021, the City of Davis tested the impact of a two-way bike lane and intersection changes on 14th Street and Oak Avenue to make it safer for residents. The area is rich with schools and civic amenities, and is surrounded by houses and apartments that accommodate hundreds of community members young and old riding through on bicycles and in cars to get to school and work. It is quite a sight to see young kids riding tandem with adults, families riding together, and groups of students traveling through the neighborhood to get their activities started for the day. Anyone who doubts that a vibrant biking community can be built hasn’t been to Davis to witness the active transportation splendor.

“It’s incredible.… It’s as close to Amsterdam as you get for Davis. Other than the university, I don’t believe there is a bigger concentration of kids riding their bikes than here,” said Tim Csontos, chair of the Davis Bicycling, Transportation, and Street Safety Commission who lives near where the pilot project took place. “It’s really cool, the number of kids who are out there.”

Along 14th Street, there is a half-mile stretch comprising frequented civic amenities such as Davis Senior High School, Mary L. Stephens Davis Library, Davis Veterans Memorial Center, and North Davis Elementary School, all on the same side of the street. The highly accessed institutions with relatively few driveways made it a great option to try out the two-way bike lane, according to Brian Abbanat, senior transportation planner with the City of Davis.

Two-way bike lanes, or cycle tracks, are different from what many are used to seeing along city streets. Typically bikes travel alongside traffic, flowing in the same direction as cars in the shoulder of the road or in a painted bike lane. A two-way bike lane is its own bikeway, separated from traffic, and allows for bikes to flow in both directions on the same side of the road. These lanes reduce the risk of a cyclist being hit by the door of a parked vehicle, it can help to eliminate the need to cross traffic for turns, and it is more comfortable for riders of all ages and skill levels.

“You want those kids to be able to ride their bike to those schools and their parents to feel like their kids are safe,” shared Abbanat. Including St. James School, which is just up the street, there is a high number of young cyclists riding through before and after school. It made sense to test the new lane on the north side of the street and physically separate cyclists from cars. 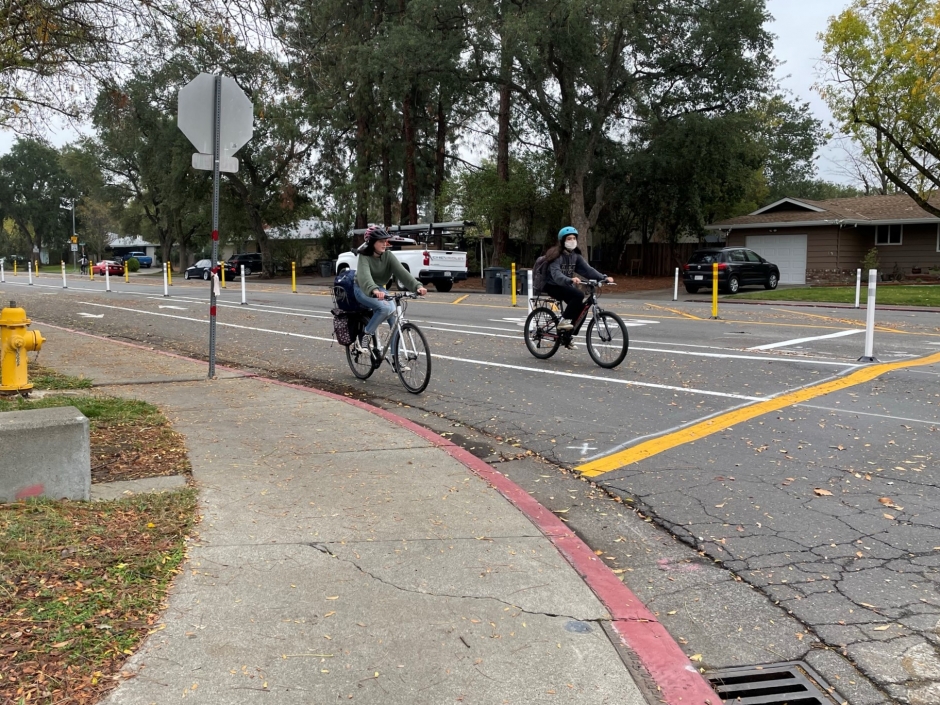 With all the benefits of two-way bike lanes, they can also be a challenge for planners and users in the implementation. The intersection on 14th Street and Oak Avenue is busy with traffic. Abbanat and his team have been struggling with how to facilitate access to the bike lane from that intersection. The solution they tested was a protected intersection to make it easier for cyclists to enter the lane safely and navigate car traffic.

“It’s simply about trying to protect people and making streets safe,” said Csontos. He believes it is great the city is doing a pilot for this project and thinks that there should be more like it in the future. Csontos was on the ground the first day of the pilot, getting feedback from parents and cyclists. The community was positive about the changes. “Everyone I talked to has been thrilled about it,” he added.