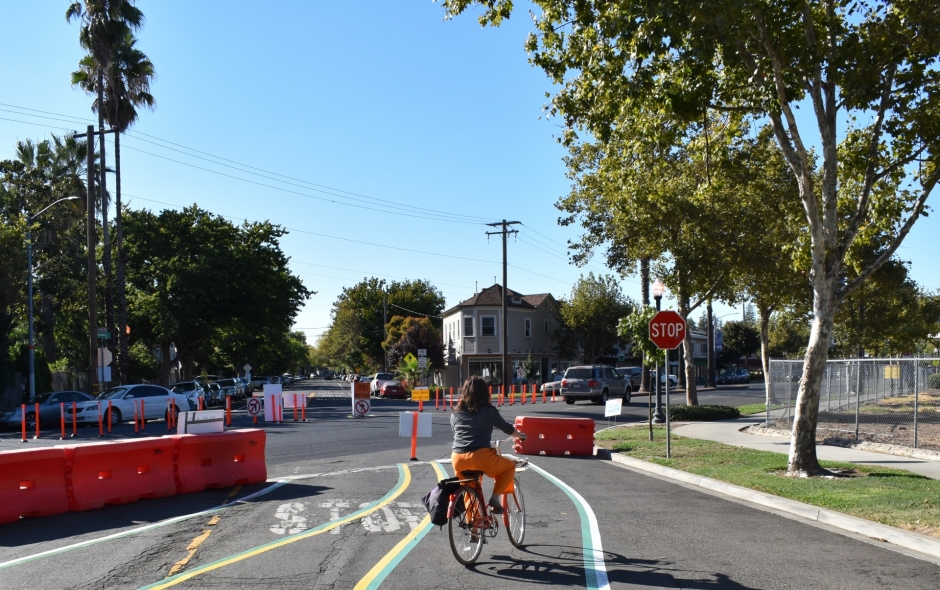 Traditional city planning is a long game, with projects often taking 10 to 20 years (or more) to complete. Planners take care to design spaces and infrastructure with input from the community, but sometimes it can be challenging for residents to envision how a project might really impact their neighborhood. What if there was another way to test designs and show large-scale project progress along the way? That is how the City of Sacramento piloted and has made permanent a small project with big safety and mobility impacts on Broadway at the intersection of 34th Street and 2nd Avenue as part of their long-term Envision Broadway in Oak Park Plan.

The plan “outlines a vision for future mobility along the Broadway corridor from Franklin Boulevard to Martin Luther King Jr. Boulevard” and “will enhance accessibility and safety for all modes of transportation.” While gathering community feedback and analyzing data for the project, one intersection stood out to city planners. They found the intersection where 2nd Avenue crosses 34th Street and Broadway was treacherous, with a much higher rate of collisions than other streets along the corridor. This danger caused pedestrians, cyclists, and drivers to avoid the area and made transit users wary of a busy bus stop located here. City Councilmember Jay Schenirer has seen his share of collisions at that intersection, including one involving his wife a few years ago, and recognized the need to make a change: “The high number of collisions not only impact traffic; it is very unsafe for pedestrians and bicyclists. There are students down the street at Sac High who rely on the bus stop located here; business patrons and residents cross here. Everyone deserves to feel safe when walking or riding through their neighborhood, especially at the busiest intersections.” 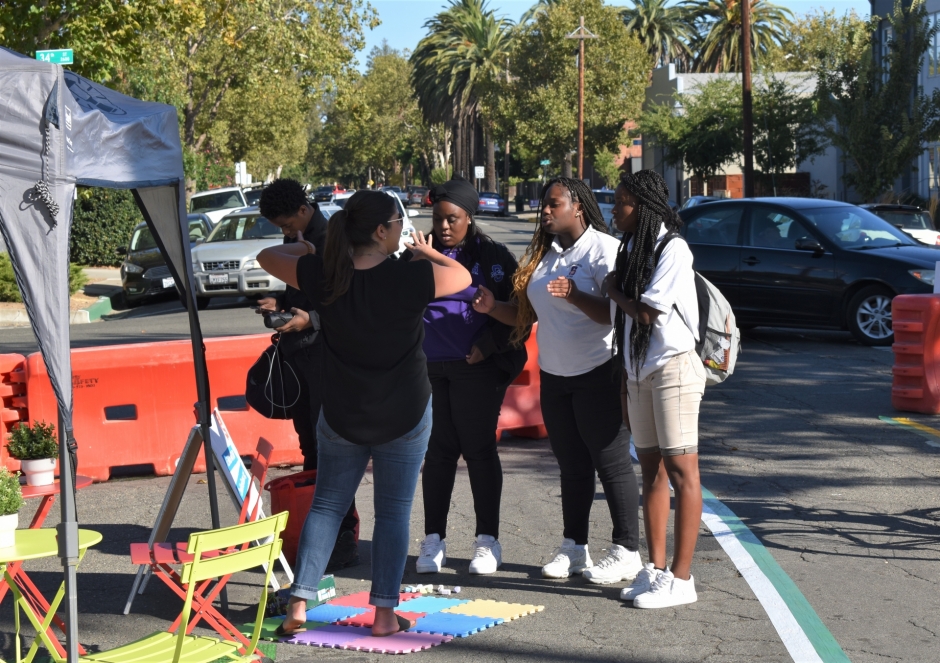 City planners needed to do something urgently to improve the safety where 2nd Avenue crosses 34th Street and Broadway and could not wait for construction of the long-term project. They had a simple idea to pilot a temporary closure on a small section of 2nd Avenue and monitor its effect on traffic flow and for the community at large. They used temporary barricades to close the intersection to traffic September 26–29, 2019. During the closure, only pedestrians and bicycles were allowed to use the intersection, and the city set up a pop-up event to gather community feedback about the change. The result was overwhelming support from community members, pedestrians, cyclists, and drivers across the board.

Because of the project’s positive feedback and safety implications, the City Council adopted a resolution on July 20, 2021, to permanently close the intersection to cars but allow pedestrian and bike traffic. Temporary barricades will be used until the project undergoes final construction.

This practice of tactical urbanism is a low-cost opportunity to test an idea and gather real-time feedback on a project’s impact. It takes the guesswork out of planning and spending on infrastructure that may not be the right solution. To fund this project, the City of Sacramento utilized SACOG’s Transportation Demand Management (TDM) Mini-Grant Program. The 2019 program provided funding to projects under $10,000 that tested the effectiveness of and community readiness for programs encouraging bicycling, walking, ride sharing, and riding transit.

The Envision Broadway in Oak Park Plan project manager, Leslie Mancebo, notes, “Plans are important, but it is really valuable to test a piece of the plan to get immediate feedback and learn lessons before permanently implementing a concept.” She would like to continue the integration of testing short-term projects that contribute to the large-scale plan. “It is unique that we can take the community vision for a big corridor project, demonstrate a small feature, and implement something in the short term.”