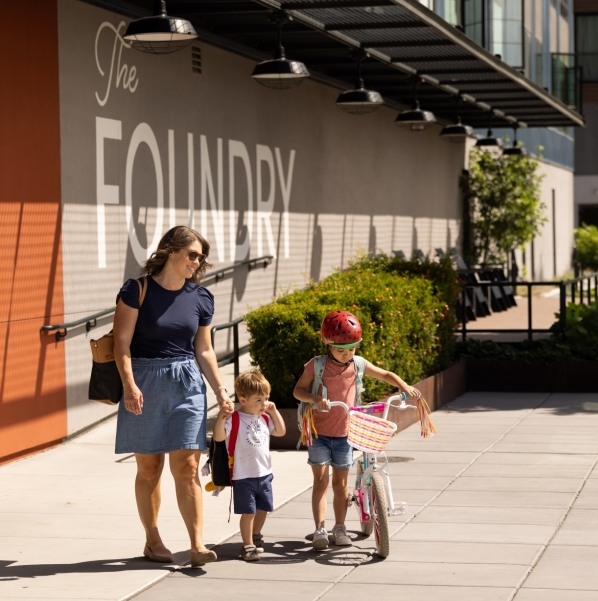 August 16, 2022: The City of West Sacramento is working toward an interconnected multi-modal future with two recent achievements. The city recently began construction on an extension of Riverfront Street and received an award from the American Planning Association for the city’s Mobility Action Plan earlier this year.

As part of the city’s long-term vision to connect the burgeoning urban Bridge District to the future Pioneer Bluff District and residential Southport area, West Sacramento is beginning construction on a vital new roadway. Currently, Highway 50 bisects the city and makes cross-town active transportation a challenge. To close this divide, the city will widen 5th Street to make room for a separated two-way bike path and sidewalk, and extend Riverfront Street between Mill Street and 15th Street.

Former West Sacramento Planning Commission Chair Bernadette Austin shared that, “as a resident and mother of two school-age children, our family is looking forward to being able to use the safe new bike path to attend River Cats games at Sutter Health Park or venture across the river to visit Old Sacramento.” She pointed out that although her family has made these trips in the past, riding their bikes next to big rigs on major corridors was not the most comfortable option, so they opted to drive instead. The Riverfront Street Extension will begin just south of Mill Street, continue underneath the US-50 Pioneer Bridge, and end with a cul-de-sac. The street will include a two-lane roadway with sidewalks, lighting, and landscaping. Once the plans for these changes were finalized, the city worked with SACOG to secure additional funding and was ultimately awarded more than $3.6 million.

The Riverfront Street Extension and 5th Street widening project are a part of the Bridge District Specific Plan, which provides a framework for the development of a well-planned, waterfront-oriented urban district for the city. The Specific Plan was significantly updated in 2009 in an effort to transition the Bridge District from its industrial past to an urban mixed-use district. “We are taking steps to increase safe multi-modal opportunities throughout the city. By adding this infrastructure, we are making a critical connection between major housing and commercial areas,” said City of West Sacramento Mayor and SACOG Board Member Martha Guerro.

However, this project isn’t the only thing West Sacramento is being recognized for. The Sacramento Valley Section of the American Planning Association (APA) was recently awarded the Transportation Planning Award of Excellence for the city’s Mobility Action Plan. West Sacramento took its transportation plan a step further by linking transportation needs with different modes of travel, so its network is better connected. Like many other cities, West Sacramento was originally designed for residents to be car dependent, but the Mobility Action Plan prioritizes zero-emission vehicles, active transportation, and emerging mobility options such as bikeshare, on-demand microtransit, and micromobility options to help residents meet their daily needs and reduce greenhouse gas emissions. Along with the infrastructure connections and new technologies necessary to make these multi-model options available, the plan addresses equity and access for community members across all abilities, income levels, and age groups. This plan builds upon the policies and recommendations set forth by the West Sacramento General Plan 2035, the West Sacramento Climate Action Plan, and the Sacramento and West Sacramento joint Mayors’ Commission on Climate Change.

To learn more about the projects and plans the City of West Sacramento is undertaking, check out the city’s website: https://www.cityofwestsacramento.org/.