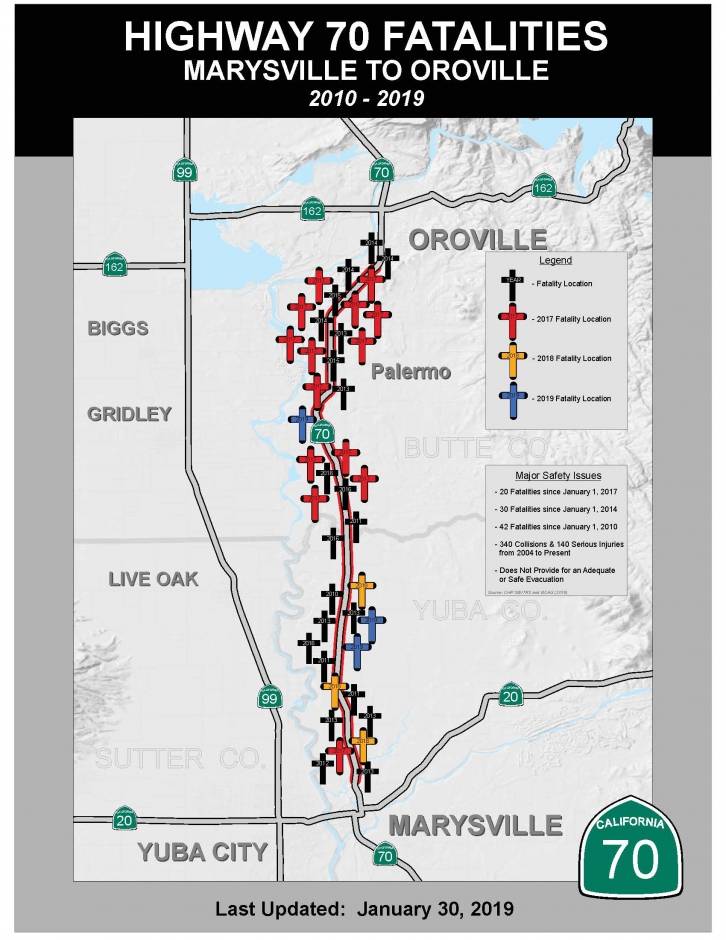 May 23, 2019: Caltrans is undertaking six near-term safety projects along SR 70 between Marysville and Oroville, which has long had a reputation as a dangerous road. There have been 42 fatalities on the 27 miles between the two cities in the last decade, making it 3.8 times deadlier than the average California highway.

Some local leaders and stakeholders have been pushing for the road to become a continuous four-lane facility between Marysville and Oroville but the project faces a funding gap. In the meantime, fatalities keep coming: there have been 20 since the start of 2017.

On an especially dangerous 9.6 mile stretch of the road, starting just north of Marysville, Caltrans will provide a two-way left turn lane, widen and pave shoulders, clear hazards in a Clear Recovery Zone beyond the paved shoulders, create passing opportunities, increase the room for slow moving agricultural equipment, and extend paved shoulders for school buses as they pick up and drop off kids, which happens 26 times a day on this stretch of road.

But more can be done more quickly to improve safety along Highway 70. SACOG and BCAG staff were among the participants in a recent Caltrans road safety audit led that provided valuable input on actions that can be taken over the next year before the safety construction projects being.

Key safety countermeasures that are being implemented immediately include solar-powered speed feedback signs, other signs advising impatient drivers that there are passing zones ahead, and a new daytime headlight section covering 22 miles. National and international studies have found that using headlights reduce daytime vehicle accidents from 5 to 15 percent.

“There are many important safety features identified through the road safety audit and included in the safety project that should help reduce collisions along this corridor. Focusing initial efforts on implementing safety countermeasures over lane expansions makes the planned actions promising and cost-effective” said Matt Carpenter, SACOG’s director of transportation services.