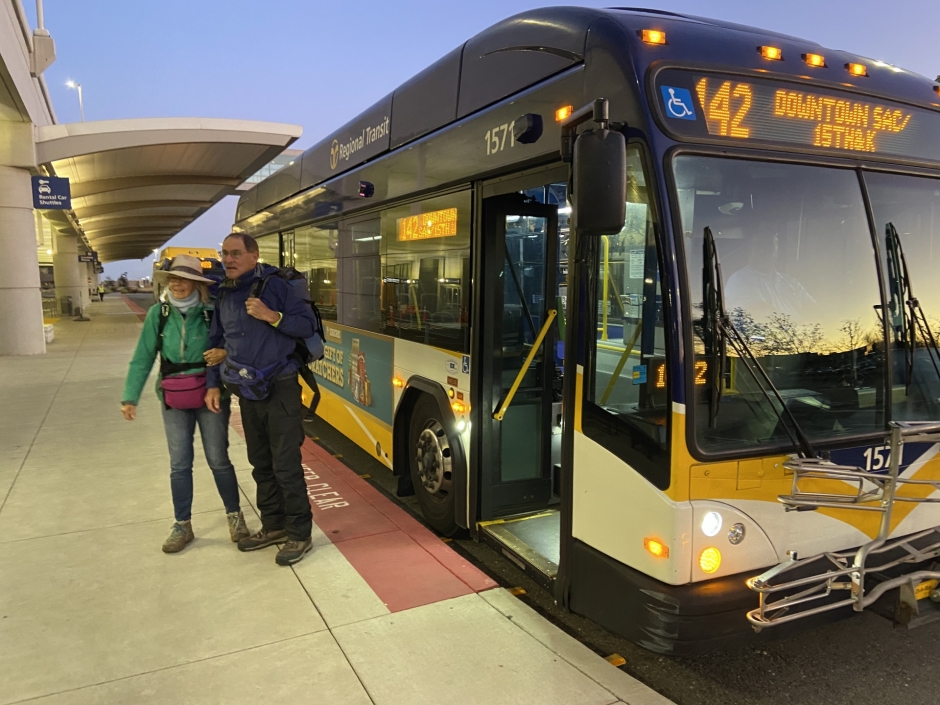 January 30, 2020: The new year started with a flurry of activity for Sacramento Regional Transit  (SacRT). On January 6, in partnership with Yolobus, it launched its new Airport Express between downtown Sacramento and Sacramento International Airport and a week later it announced the expansion of its SmaRT Ride microtransit service.

The expansion of this service to 42 shuttles makes SacRT the largest microtransit provider in the country.

Prior to the airport express service, Sacramento was believed to be the largest city in the country without a dedicated airport bus service. The new route 142 operates seven days a week every 20 to 30 minutes combined with Yolobus downtown/airport routes 42A and 42B.

A key feature of the new service is that it begins as early as 3:24 a.m. and operates just past midnight. This makes it a valuable resource for airport employees, some of whom begin work at 4 a.m., said airport manager Larry Fleshman.

Calling the new service “a great step forward for the Sacramento region,” SACOG Executive Director James Corless said “access to the airport is a vital transportation link for economic prosperity and more frequent bus service will help reduce congestion on one of our busiest stretches of freeway.”

There are several downtown drop-off and pickup locations along J Street, L Street and Capitol in downtown Sacramento with direct service to Terminals A and B at the Sacramento International Airport.

SmaRT Ride has been in operation since February 2018, when it rolled out as a pilot service in Citrus Heights. That service has also been operating in Orangevale/Antelope and in the Franklin Blvd. – South Sacramento area and Raancho Cordova. To date, SacRT has provided more than 165,000 SmaRT Ride trips.

“We have seen great success with our other SmaRT Ride zones and we are excited to be able to provide this innovative mobility option to more communities,” said SacRT General Manager/CEO Henry Li. “This expansion is a huge milestone for SacRT as we continue to explore new transit options and improve access and mobility for our riders.”

Similar to other ride-hailing services, SmaRT Ride uses a smartphone app to schedule customized trips. The app, called SacRT SmaRT Ride, is powered by Via, which also operates on-demand shuttles in West Sacramento.

The service relies on small, neighborhood-friendly shuttle buses to easily maneuver on residential streets, and they conveniently accommodate people with disabilities.

The new service zones offer corner-to-corner service where passengers are picked up and dropped off at the nearest corner or “virtual bus stop,” which is usually within a block or two of their pickup or drop-off location, ensuring pickups and drop-offs are as efficient as possible.

The new SmaRT Ride service is provided through Measure A funding. SacRT was awarded with a $12 million grant by the Sacramento Transportation Authority to help expand microtransit into new communities throughout the region.

More information on the service, including maps of the service areas and hours of operation, is available at SacRT.com/smartride.