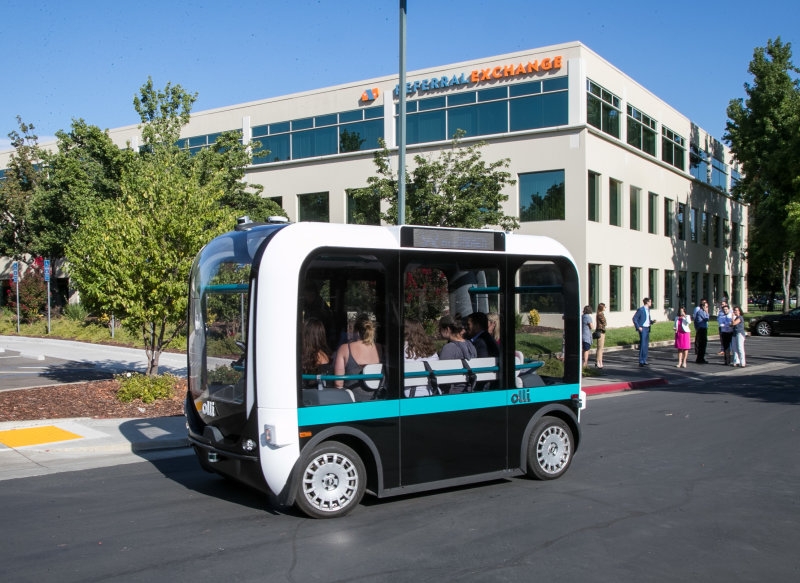 August 27, 2019: The Olli autonomous shuttle that circles the parking lot at White Rock Corporate Campus moves at a stately pace but it is a symbol of a city that is trying to move fast.

“In Rancho Cordova, we like being first … and this is the first city in the country to test a business use for Olli,” said Vice Mayor David Sander before he hopped on the Olli for the shuttle’s first lap around the large office park.

On the shuttle’s second lap were some workers from real estate company Referral Exchange, which has offices in the White Rock Corporate Campus. “[Olli] felt safe and relaxing. After work you don’t want to walk back to your car, or it would be good if you had a disability,” said Monica Garcia, who rode the Olli shuttle with three friends from work. It was the first trip in an autonomous vehicle for all four women.

The three-month pilot project primarily funded by SACOG through a $90,000 grant, and with funding assistance of $10,000 from the City of Rancho Cordova, is testing “how the public feels about it, how the workers utilize it, and potentially how it could provide congestion relief, and it all starts here in Rancho Cordova,” said Sander.

This year the suburban city of about 73,000 people has launched several other projects aimed at moving the city forward. To boost transit ridership and to make it easier for workers to get to Rancho Cordova, in May it launched a pilot program that offers SacRT riders with a Lyft coupon code (RCFREE5) worth up to $5. The coupon code can be used toward a Lyft ride that begins or ends at one of the four SacRT light rail stations in the city, up to 60 times per month. Rancho Cordova is the region’s second-largest employment center, attracting about 50,000 commuters a day.

“This innovative pilot program, the first ride-hailing partnership focused on commuter travel in the Sacramento region, will study whether incentives such as a $5 Lyft credit, designed to make using SacRT more convenient and affordable, will increase use of public transportation,” said Sander.

SACOG, where Sander is the current board chair, is very interested in the data the pilot will generate, as cracking the first/last mile connection problem is a key factor in reducing the share of commuter trips made by solo drivers, which is about 50 percent. SACOG helped launch the pilot with funding of $75,000.

“One of the best ways to boost transit ridership is to make it easier for people to get to stations,” said SACOG executive director James Corless. “We are looking forward to seeing the results of this pilot program to help us understand if new mobility can increase access to light rail to help lower car trips, congestion, and greenhouse gas emissions.”

In August, the city approved the launch of the Economic Development Jobs and Talent Attraction Program, which aims to attract fast-growing companies to the city. The fund will grant $2.5 million to companies operating in the city over the next 24 months and is expected to generate $60 million in total payroll and more than $400,000 in new tax revenue annually. And in the same month, the city and Rancho Cordova Travel & Tourism helped launch the California Capital Film Office, with a mission of supporting, attracting, and promoting film, television and multimedia projects to Rancho Cordova and the region.

“We want the California Capital Film Office to be the one-stop resource in Rancho Cordova and the greater Sacramento region for the film industry nationwide. Our office will provide the necessary logistical services to the industry and bring economic and cultural benefits to the region,” said Ricky Borba, Executive Director of CCFO.