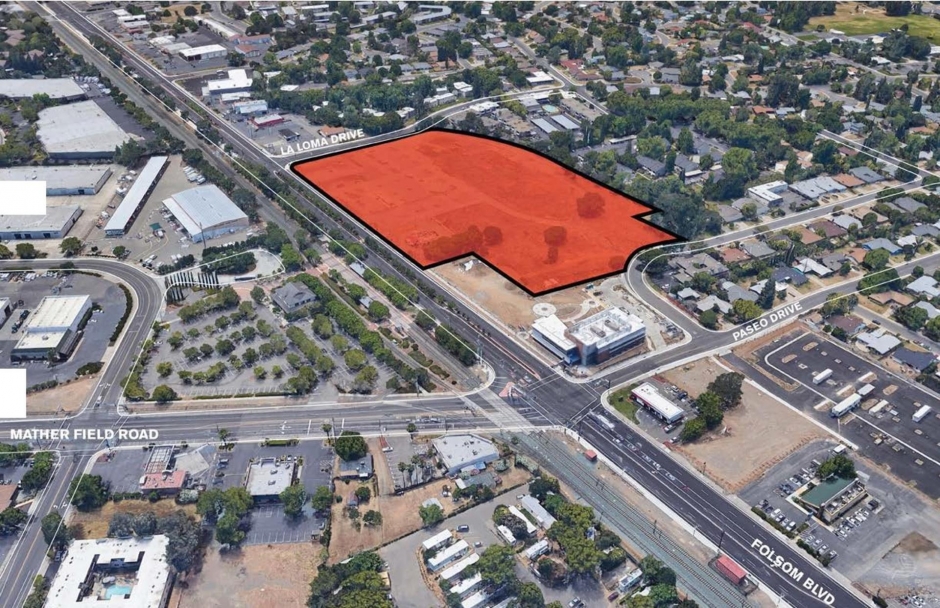 February 26, 2020: The City of Rancho Cordova is investing millions of dollars in developing a community hub on what its economic development manager Amanda Norton called “truly a catalyst site.”

The City purchased the 9.8 acre site next to Folsom Lake College’s Rancho campus in 2018 and is in the process of reviewing proposals from the three short-listed development groups to transform the suburban commercial corridor site into the Mills Station District. The City expects to select a preferred developer this spring, said Norton.

She said the City had long eyed the site as it is a prime location directly opposite the Mather/Mills light rail station. It is also in an Opportunity Zone, which makes the development more attractive to investors who want to use their capital gains to make a difference in an underserved community.

The “must-have” list of the City’s intentions for the site is a short one: it must be a “community gathering spot” and the project must “pencil”, meaning the project must be financially sustainable. In the Offering Memorandum, the City suggested the types of elements that may make up the Mills Station District: cultural facilities such as spaces for performing arts, art exhibitions, museum, nature center, and library; recreational spaces such as basketball courts, playgrounds, maker spaces, and a classroom kitchen; commercial and residential uses such as apartment buildings, cafes, restaurants, and a conference center; and community facilities such as a public plaza, teen activity center, counseling service, classrooms, and daycare.

These suggestions had come from community meetings with the City Council, where Norton said that the idea of a community center was frequently requested. Other popular ideas were community gathering hubs with things to do, like a destination for food trucks and splash pads.

SACOG Executive Director James Corless is on the advisory panel that helped select the shortlist of developer proposals and said he was impressed that the City had attracted such impressive proposals from a wide range of national developers.

Norton she said she anticipated the development would be able to move quickly, as the infill site had existing infrastructure, although it would need to be modified. And she said that City staff were highly motivated to move the project along quickly, which she said would proceed faster than elsewhere in the region.

From the City’s work on the development proposals, Norton said the key lessons were to be flexible and open-minded about what form the development might take. The City chose to use an offering memorandum rather than more a more traditional and formal Request for Qualifications process to make it more “open and encompassing” and to allow development groups to respond in a  way that allowed them to be more “flexible and creative.”

City staff are reviewing the three short-listed development proposals and this spring will recommend to the City Council that the City enter into an exclusive agreement to negotiate with one of the development groups.