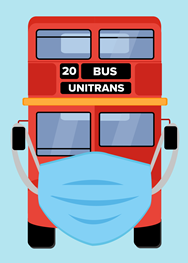 August 27, 2020: Less than two years after California became the first state to mandate an all-electric bus transit fleet, the Sacramento region is making big steps toward the 2040 deadline.

This month Unitrans, the Davis bus service that runs in partnership between the City of Davis and UC Davis, won a grant of almost $4 million from the Federal Transit Administration to help it buy five new electric buses that are expected to be on the road in fall 2021. That means Unitrans now has funds to buy 11 electric buses and is seeking funding for three more said general manager Jeff Flynn, who spoke from his office over the sounds of construction outside his window on a new electric charging facility for 14 buses, which SACOG helped fund.

Unitrans was leading on electrification for a variety of factors, explained Flynn. As a high-capacity and primarily short-trip service, electrification was a good fit. Unitrans is the second-most crowded bus system in California and in the top 10 nationally, according to the National Transit Database. And “every single driver and supervisor and most of the management team are students, who are the people most focused on climate goals to preserve their future,” said Flynn, adding that the City of Davis and UC Davis are both aiming to be climate change leaders.

It was also a question of timing. Federal recession recovery funds had helped Unitrans buy 25 buses in 2009, most of which are now coming to the end of their lives. Thirteen buses are being rehabilitated to get the latest in near-zero emission Cummins CNG engines and the other 12 are to be replaced by electric buses.

California’s Innovative Clean Transit Regulation was adopted in December 2018 and requires all public transit agencies to gradually transition to a 100 percent zero-emission bus fleet. From 2029, all transit bus purchases must be all-electric, and transit agencies’ fleets must be all-electric by 2040. As Flynn said, “everybody is either thinking about electrification or planning for it.”

Implementation of the regulation is expected to reduce greenhouse gas emissions by 19 million metric tons from 2020 to 2050 – the equivalent of taking 4 million cars off the road, according to the California Air Resources Board (CARB). And it will reduce harmful tailpipe emissions (nitrogen oxides and particulate matter) by about 7,000 tons and 40 tons respectively during that same 30-year period.

When the rule was introduced in December 2018, there were 153 electric buses in the state and there are believed to be about 1,000 now, out of a total state public transit bus fleet of about 12,000. CARB estimates that California transit agencies will save $1.5 billion in maintenance, fuel, and other costs by 2050 after the full buildout of electrification infrastructure.

While Unitrans may temporarily leap ahead of other transit agencies in full-length electric bus count with its replacement program, others are also transitioning. The new Causeway Connection service between Sacramento and Davis uses 12 electric buses, with six owned by SacRT and the other six by Yolobus, and SacRT operates nine electric on-demand shuttles. SacRT is also about to buy three electric buses for its Airport Express service that are expected to be in service by the end of 2021.