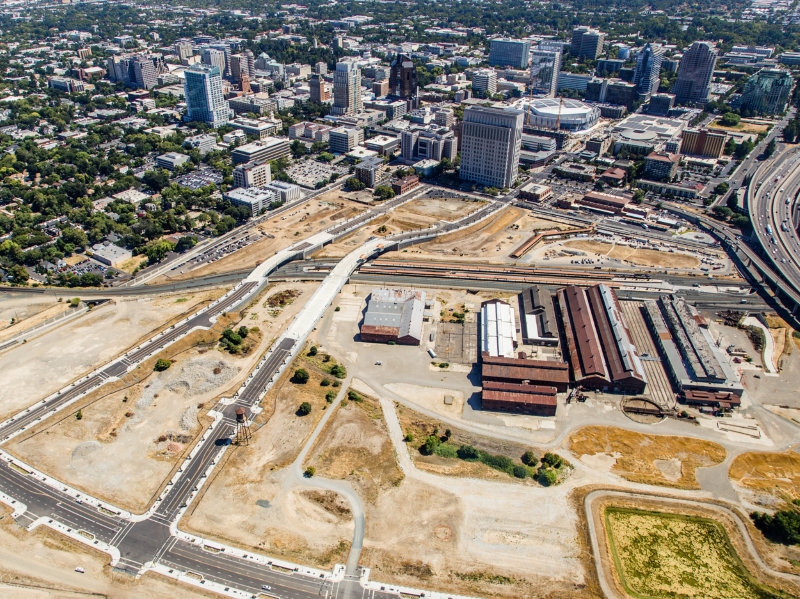 June 26, 2019: Two projects in Sacramento’s downtown field of dreams got a big boost on Friday.

When the California Strategic Growth Council board approved both of the Sacramento region projects that had applied for Affordable Housing and Sustainable Communities Program funding, they pumped more than $34 million into the downtown Railyards/River District.

The Twin Rivers public housing project got $18,793, 015 towards a second phase of the innovative mixed-use/public housing rebuild. The first phase had previously been awarded $23 million from the California Strategic Growth Council under its Transformative Climate Communities program.

The second phase of the Twin Rivers project includes 123 units of new housing of which 100 units are affordable, 1.2 miles of sidewalks, and almost a mile of bikeways within the new master planned development. The project will make connections to transportation, employment, cultural and educational resources in nearby downtown Sacramento with over two miles of Class IV bikeways as well as multiple crosswalk safety enhancements. The project also intends to fund bicycle safety courses targeted towards low income communities and will buy two new CNG buses to improve headways on Route 11 and to connect the route south to Sacramento City College.

The Railyards Activation Project is seen as a catalyst to attract more development to the former railyards north of downtown Sacramento. The Railyards is a 244-acre urban infill project that so far has two major projects announced: a Kaiser Center of Excellence for healthcare and a Major League Soccer stadium.

The $15,211,698 granted to the activation project will fund a mixed-use, mixed-income development with 61 affordable units, bike parking, and electric vehicle charging stations. The proposed transportation scope aims to make connections between the proposed housing site and the broader Sacramento area. This would include protected bikeways, class II bikeways, sidewalks, and street trees connecting the Railyards to the surrounding neighborhoods.

The new housing projects, two new light rail stations, and associated transportation connections and improvements could prove a gamechanger for the River District/Railyards neighborhoods, which have been physically and socially isolated from the adjacent downtown community. When fully developed, the Railyards alone would roughly double the size of Sacramento’s downtown, while adding at least 6,000 homes and condos.

Both projects had applied for California Strategic Growth Council funding last year but missed out. SACOG and others helped refine the applications which resulted in them boosting their scores and qualifying this year. That meant the Sacramento region won funding for both of its projects in the program, which represented 8.46 percent of the total awards statewide.