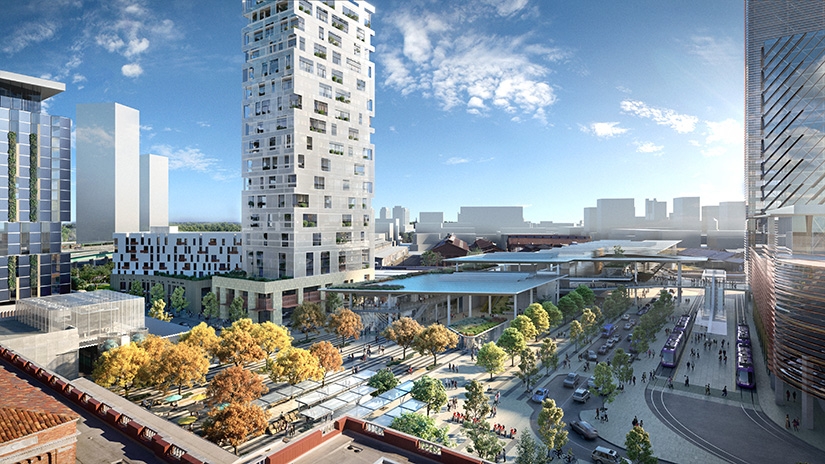 July 19, 2022: An award of $50 million from the Transit and Intercity Rail Capital Program (TIRCP) from the California State Transportation Agency (CalSTA) kicks off the third phase of development for the Sacramento Valley Station, the growing transit hub for the region.

Transformation of the Sacramento Valley Station has been happening continuously over the past decade, and community members will begin to see the TIRCP investments taking shape over the next five years. The new funding kicks off phase three of construction for the station, including a two-level Bus Mobility Center to improve connections from transit to train and light rail, storm drain infrastructure improvements that allow for high density residential and commercial development, contactless readers, and a bus layover facility for transit operators.

Sacramento’s station earned the fourth-highest award amount in the state. Funded by Cap-and-Trade Program dollars, TIRCP has recently seen a historic influx of money for projects that modernize California’s transit and rail systems with the goal of increasing mobility and decreasing greenhouse gas emissions. That’s good news for transit programs.

“It’s nice to see a big award like that go to the Sacramento region,” said Rob Padgette, managing director of the Capitol Corridor Joint Powers Authority (CCJPA). “This is going to show the rest of California how a somewhat auto dependent region can take advantage of existing resources and pull those resources together to have a positive impact on greenhouse gas emissions.”

“We are excited that the state shares our vision of the Sacramento Valley Station, underscoring the importance of passenger rail as part of mobility in the Sacramento region,” said Don Saylor, CCJPA board chair and SACOG board member. “Their investment will not only establish the station as a transportation hub for the Northern California mega-region but will increase the safety and reliability of our rail and transit systems, ultimately improving the overall passenger experience.”

The application was a joint effort between the City of Sacramento, Capitol Corridor Joint Powers Authority, Sacramento Regional Transit District, Downtown Railyard Ventures, and the Sacramento Area Council of Governments. Working across agencies was a challenge, but was well worth it, according to Jim Allison, manager of planning with the Capitol Corridor Joint Powers Authority. “Without partnerships you can’t integrate,” he explained. “It takes a lot of effort, but the rewards are pretty good.”

The project was awarded a $3.6 million grant from TIRCP in 2020. According to project leaders, this helped with setup for the most recent award. Because of a transit study conducted by SACOG with the 2020 grant, the Sacramento Valley Station phase three was primed for new investment. Now the team will look for opportunities to use this award and further leverage some of the federal funding opportunities, according to Padgette.

“The collaboration with partner agencies has been essential for the success of this project,” added Greg Taylor, Sacramento Valley Station project manager. “This is a twenty-year partnership which the city has led for the region with its partners, and we are on the verge of taking SVS to the next level as a critical regional transit hub that will connect all Northern California communities to the urban centers via efficient and sustainable modes.”