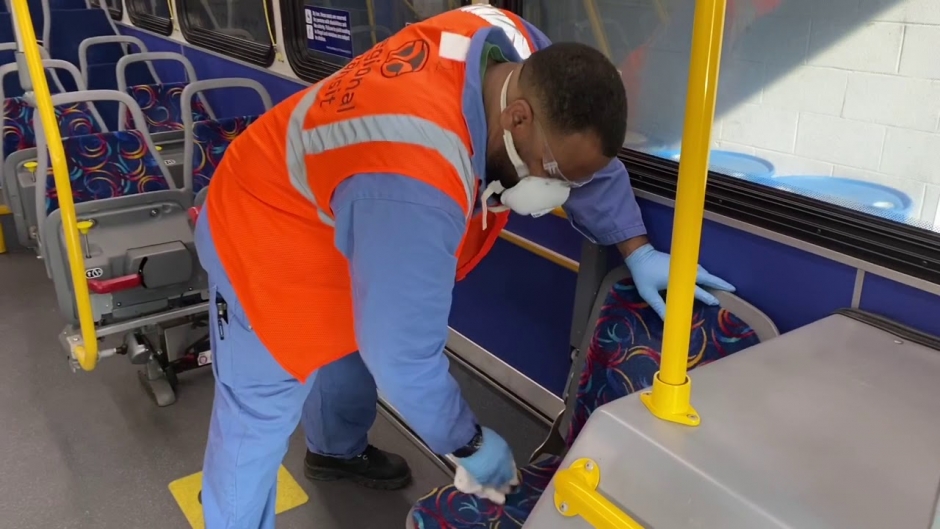 March 31, 2020: Transit agencies have been on the leading edge of the Covid19 crisis. They were one of the first sectors of the economy to be hit hard, as many employers sent workers home to telecommute or closed their doors entirely. Schools across the Greater Sacramento region closed two weeks ago, leaving another large group of transit riders at home.

By the end of last week, ridership was down by about 75 percent across SacRT’s network, said spokesperson Jessica Gonzales. That figure was the same for Yuba-Sutter Transit said Transit Manager Keith Martin.

“Systemwide ridership is down around 55 percent with some services slightly better and some slightly worse.  To date, one all day shuttle route that serves only the Yuba College Sutter Center campus has been suspended since March 12 because no in-person classes are being conducted and we have reduced the number of demand response service hours operated by around 50 percent due to a lack of passengers,” said Martin.

SacRT has switched to Sunday schedules seven days a week for most of its services. The newly launched Airport Express service has been suspended but the new Causeway Connection service will still launch as planned on April 6.

SacRT’s ridership drop is being mirrored across the state. Bay Area Rapid Transit (BART) ridership was down 92 percent on Wednesday, March 25, and LA Metro ridership was down by 81 percent on light rail and 68 percent on buses on Monday, March 23. That is in the context of much travel across California halting. The Los Angeles Times reported that on the first weekday of the statewide stay-at-home-order, “the number of miles driven by passenger vehicles fell 53% on Monday compared to normal levels, according to the traffic data company Inrix.”

But as SacRT CEO Henry Li said, “in the midst of COVID-19 precautions, some of us must continue to work in order to provide essential service for our community. Life around us has been put on hold; however, SacRT operators and supporting staff, including maintenance, facility, administrative and other front-line personnel continue to operate business as usual to keep the region moving.”

Keeping the region moving also means increased costs for transit operators. At an online SACOG Transit Coordinating Committee meeting on Monday, March 23, operators shared their enhanced disinfecting and safety regimes, with many reporting daily disinfectant fogging or electrostatic cleaning overnight. Many are also embracing innovations such as rear-door boarding and no fare collection as measures to keep both operators and passengers safe, as Yuba-Sutter Transit is doing on its local services.

Revenues are falling off a cliff. As Joshua Shaw, the executive director of the California Transit Association, wrote in a letter to California Governor Gavin Newsom on March 21, “California’s public transit agencies face an existential crisis … The fare revenue losses and the escalating costs of our industry’s front-line efforts to protect the public’s health now threaten the fiscal solvency and operational capacity of transit agencies statewide. Unfortunately, we know the worst is yet to come.” The same day he told members that without help, several large transit agencies could completely shut down in two to three months.

That letter asked Newsom for at least $1 billion in emergency state funding for California’s transit agencies. That is on top of the bigger relief funding included in the just-passed CARES Act, which the Federal Transportation Agency will pass along to states. A state-by-state breakdown of FTA formula distributions shows that California is expected to receive $3.75 billion. Grants are to be “available for the operating expenses of transit agencies related to the response to a coronavirus public health emergency.”

The grants carry a 100 percent federal cost share and “while the grants could, in theory, be used for capital programs or operating costs, it is expected that almost all of the $25 billion will go towards operating costs to make up for lost farebox and dedicated tax revenues,” wrote Jeff Davis from the Eno Center for Transportation.