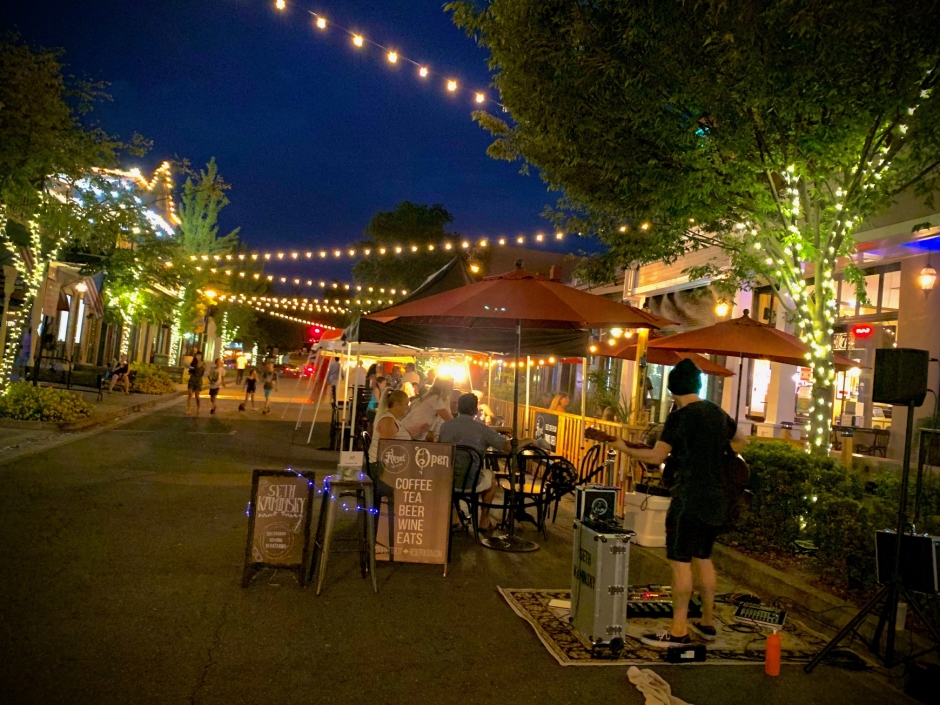 August 21, 2020: When the restaurateurs of Folsom’s historic downtown district asked the City to close Sutter Street to allow more outdoor dining space, they were not expecting to be serving in 110-degree weather. But on August 17, the final night of the first trial weekend of the street closure, the mercury hit that mark at 6pm as California experienced the hottest two weeks in its history.

It was a reminder that nothing about the hospitality business during a pandemic is easy, and especially not the supposedly simple solution of allowing restaurants, bars, and other retailers to expand onto public rights of way. Several cities around the Sacramento region have made efforts to allow businesses to expand outdoors and so we checked in with two cities at different stages of those initiatives to learn what is working.

In Davis, the City and the Davis Downtown Business Association (DDBA) collaborated on a program called Open Air Davis, which they described as “any place and any time a downtown business offers individuals and families accommodations in an outdoor, fresh air atmosphere.” That covers both main efforts cities have made to allow more outdoor business space: temporary permits to allow businesses to use public space like sidewalks and parking spaces; and street closures to allow businesses to expand that use.

In the early days of shelter in place orders, “the City was really focused on ways we could help our business community,” said Diane Parro, director of community and business engagement for the City of Davis. Officials quickly agreed on the idea of a temporary permit designed to make it easy for businesses to expand outdoors. Realizing that any permit needed to be “super easy, fast, and flexible,” staff designed it along the lines of a special event permit rather than the more cumbersome public works permit. The no fee permit launched on May 28 and is issued by the police department, who reviews it with the fire department for safety issues. Parro said the police department tries to turn permit applications around in one day. “People call us on a Thursday and say, ‘I want to be serving food this weekend’,” said Parro.

Key lessons: “Find some way of hearing from businesses about what they want.”
Diane Parro, City of Davis director of community and business engagement

“Businesses have to capitalize on times of peak demand so think about how they can serve the same number of people at those peaks when social distancing makes that harder.”
Brett Maresca, Davis Downtown Business Association executive director

A month after the permits launched, street closures from Friday mornings to Sunday evenings began. Starting with a block of G Street, the program expanded to a block of 2nd Street two weeks later and then to two blocks of G Street. “It is unusual for our City to jump in and refine as we go but it was critical for businesses that we act quickly,” Parro said of both the permit and street closure process.

She said City staff set up barricades and signs but in general, Davis was doing it efficiently, quickly, and cheaply, with businesses solving most problems by themselves.

The street closures were proving “extremely popular with our community but we have not seen it get so crowded that we think it is detrimental to the social distancing guidelines,” said Parro, adding that “some businesses are largely surviving because of this program.” 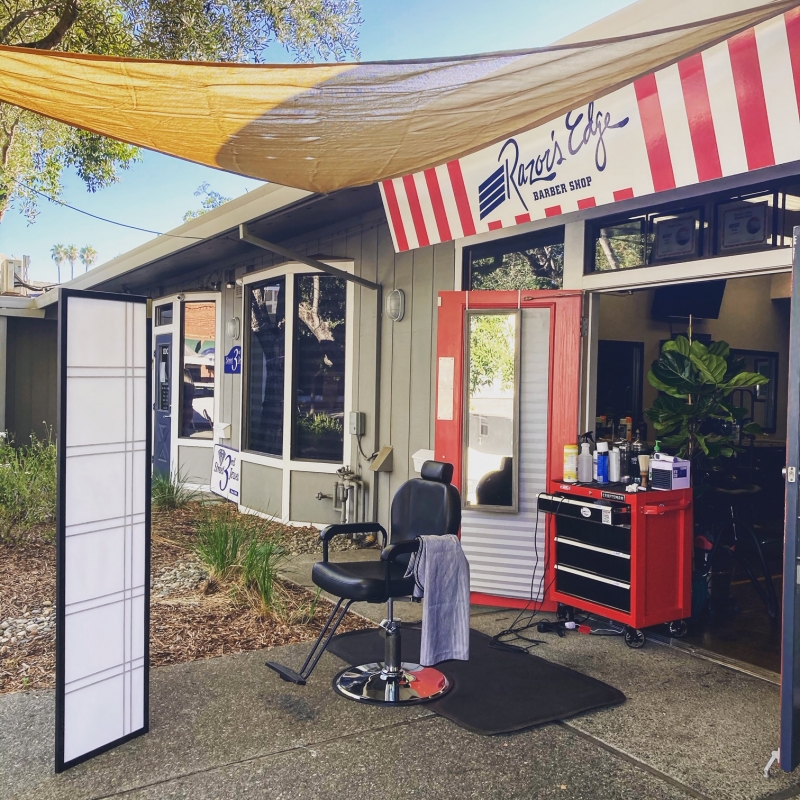 Brett Maresca, DDBA’s executive director, said the program was also extremely popular with business owners.  The association polled its membership of about 600 about trial street closures and about half of them thought it was an innovation they would use. But even the vast majority of business owners who said they would not use the program themselves supported it. About 75 businesses have expanded outdoors through the two programs, mostly hospitality but including hair and nail salons, and a few retailers.

He said there had been concerns about potential crowding but those concerns faded once people saw the experiment in action. “People have understood that it is a necessity and not just a short-term program,” said Maresca.

In Folsom the Folsom Historic District Association (FHDA) started discussing street closures in May and approached the City in June about the possibility of closing Sutter Street to vehicles but a spike in Covid-19 cases postponed those efforts. The City also issued permits allowing applicants to expand onto sidewalks and parking cut-outs along Sutter Street. Because the street is narrow and the cut-outs are mostly only two car lengths long, it did not add much space. The next step was to expand that by trialing weekend street closures, with the first landing during the heat wave.

Mark Rackovan, City of Folsom engineering manager, said Sutter Street had a history of closing for events and it was a simple process to erect barricades at either end of a three-block stretch as there is little cross traffic. Judy Collinsworth, the FHDA’s executive director, said she was grateful the City used heavy barricades, meaning the association did not have to pay to staff the barricades as it usually does.

To start small, FHDA did not market the open-air dining trial but in the evening people came out to support businesses and those restaurants that participated found it worthwhile.

John Voelz, the owner of Reset Cafe, said the “amazing weekend” was “record-breaking. If we can keep this up, we’ll eventually recover. The crowds were respectful, careful, kind, and generous. … The seats we gained outside allowed us to more than double the outside seating we usually have. Still shy of our inside seating, but so much closer. It was the first weekend since early March that felt normal.”