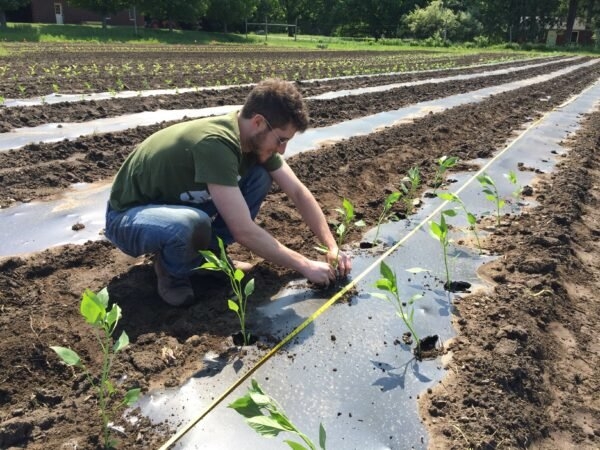 November 29, 2020: Sacramento may hang its hat on being America’s Farm to Fork Capital but how much of the food we eat in the region is local? Of the almost 1.9 million tons of food consumed within the region, only 2 percent comes from local sources, according to a 2014 SACOG report on the feasibility of food hubs.

One person well-positioned to boost that number is Jacob Weiss, whose plan to set up the Sacramento Valley Food Hub recently won him and his team $25,000 at Tufts University’s Friedman School’s Food and Nutrition Entrepreneurship Competition, winning both first place and the audience prize for their pitch to launch the food hub.

A Davis native who has worked on several small farms, Weiss decided to create the hub after observing a growing demand for local, sustainable produce, rising rates of food insecurity, and the struggle of small farms to access the larger market. “We’re the Farm to Fork Capital but we have a quarter-million people who are food insecure,” Weiss told SACOG.

In this gap Weiss sees opportunity to increase market access for farmers. He noted the huge growth in demand for local food from institutions such as the Sacramento Kings, Sacramento City Unified School District’s new Central Kitchen and its Farm-to-School program, and supermarkets such as Raley’s.

“I was seeing all of these things happening but the piece that was missing was those communities and farming families that would be left behind by this growth,” said Weiss. He noted there are huge opportunities for farmers but those are mostly accessible only to those who have enough acreage, speak English fluently, and have the capital to expand. He plans to partner with farmers who have been working for a few years, as nationally he has seen that is when they may be ready to scale up but also when many get burned out by the rigors of trying to grow their business.

A food hub could aggregate crops, pack, process, store, market, and distribute them to institutions and other buyers, letting farmers focus on what they do best: work with their land and grow high quality crops. At the same time, Weiss sees opportunity to make working with local farmers easier for large buyers, removing the need to negotiate separate supply contracts with individual farmers, for example.

In 2016, Weiss was working on several small farms in Yolo County and was also interning with the community engagement and marketing team at Raley’s and could see there wasn’t a bridge between the two worlds. He saw a food hub as that bridge and was excited to discover SACOG’s Sacramento Region Food Hub Feasibility Analysis in 2019. That became his roadmap as he worked on his idea. He said it contained many helpful pieces, from data analysis of crops to look for opportunities, a table of funding sources, personnel requirements for the first seven years, and even a blueprint for how to lay out a food hub facility.

He intends to return the Sacramento region in late 2021 to implement his vision, which he and his team are continuing to work on. He is currently based in Boston, MA where he manages a small, local food hub that does about $300,000 in annual sales. He said he’d love to work with local governments, such as the cities of Sacramento, West Sacramento, and Woodland as he searches for warehouse space and other steps to flesh out his food hub plan. . He also wants to work with beginning farmers in the region. The timing could be right. The Covid-19 pandemic has skyrocketed demand for locally grown food — Weiss knows a farmer outside of Boston who sold four times as much produce this season as the previous season — but he said farmers anticipate that could change next season as people revert to their old food habits.

The pandemic demand boom has been a lifeline for some small farmers but at the same time, it has illustrated glaring discrepancies in our food system. As Weiss said, it has revealed, “how centuries of racial oppression and violence have manifested into food insecurity and higher COVID death rates in Black and Brown communities. And how our current food system needs to be completely reimagined.”

That’s why creating a hub with the goal of racial equity baked in is key to his project, which encompasses many disciplines. “It’s sort of a blend of community organizing and urban planning, rural planning and bridging the rural and urban divide, public health — a lot of really cool intersections,” Weiss told the Davis Enterprise.