Elk Grove Officials Look to the East for Employment Center Inspiration What might Kammerer Road look like in 50 years? 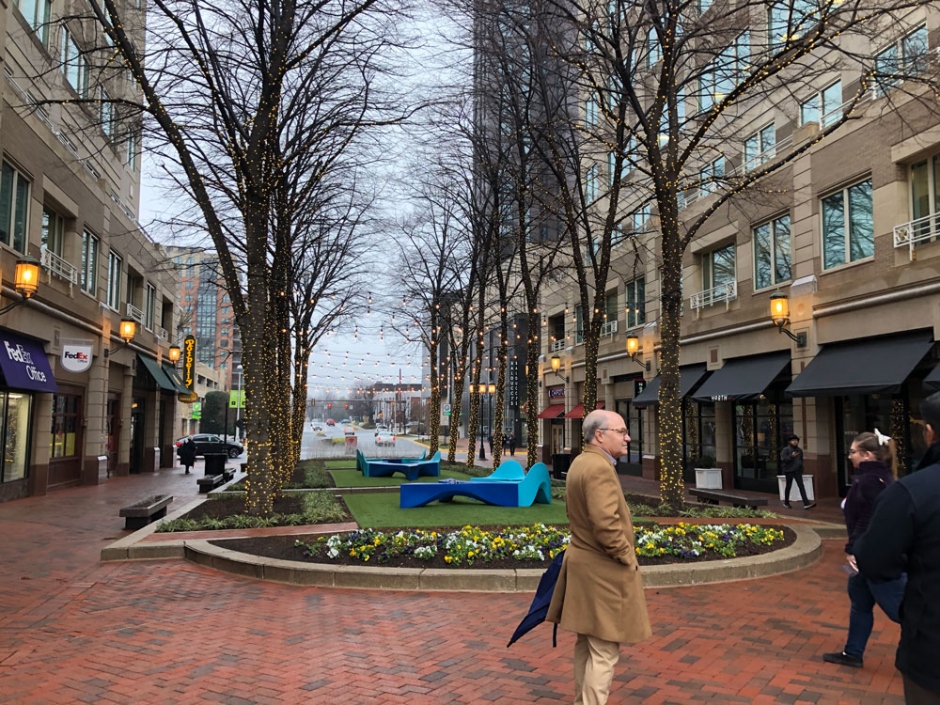 March 26, 2020: When Elk Grove staff went to Washington they were looking for inspiration to help them imagine Elk Grove’s future.

In 2014, the City of Elk Grove approved its Southeast Policy Area strategic plan, identifying land for a new employment center along the Kammerer Road corridor.  More recently and following the adoption last year of the City’s new General Plan, the City is revisiting the Southeast plan and adjoining areas on both the north and south sides of Kammerer Road, considering alternative land-use and design strategies.

“Southeast is designed as an employment-oriented development with large blocks of suburban-style business parks”, said Christopher Jordan, the City’s Director of Strategic Planning and Innovation.  “And other properties in the area are identified for regional retail.  It is a very traditional, suburban land pattern.  We are curious – is there a better way to think about this corridor?”

To aid in this effort, a small group of City officials traveled to the suburbs of Washington D.C. in Virginia and Maryland to learn what successful 21st century employment-anchored mixed-use centers look like and how they came to be.

The research trip was devised to help City officials reimagine their own urban design plans for the future development of the City’s Kammerer Road and Promenade Parkway corridors along the City’s southern edge. This effort coincides with plans to widen and extend Kammerer Road from Highway 99 to Interstate5. Construction of the new road is set to start with two lanes next year but has environmental clearance for up to four lanes. Jordan said that potential expansion of the road presents design challenges on how to knit the two sides of the road together.

He said Kammerer was currently designed as a limited access expressway with development “turning its back on the road” but the City wanted to see if there were alternative approaches that would support the area’s development as a 21st century employment center.

Virgina and Maryland offered varied examples of thriving employment centers that were much more mixed use than the 90s-era office parks that dot Elk Grove’s competitors for employers, such as Rancho Cordova, Folsom, and North Natomas. Jordan said millennial workers are looking for more vibrant, flexible, and interactive work settings that tie employment areas to entertainment, dining, shopping, and living opportunities, noting that “where the employees want to be is where the employers want to be.”

Jordan said the key lesson from the two-day tour of suburbs such as Reston, Crystal City/National Landing, and the Rosslyn-Ballston corridor was the importance of thinking long term. “We definitely learned on this trip that you have to have a long-term vision and be prepared to move on that quickly, but the timing is driven by market conditions.” Reston Town Center, for example, had been planned in the 1960s but was not built until the 1990s. And Arlington County, just across the Potomac River from Washington, D.C., successfully wooed Amazon’s new headquarters to Crystal City partly because it had a plan for the revival of that area 10 years before Amazon came looking for a new site.

These corridors in nearly every instance were directly beside single family residential neighborhoods, with pedestrian connections instead of big arterial roads or a sound wall separating them.

The buildings were diverse and integrated. Ground floor retail, residential, and office all co-existed in the same building. And the developments were dynamic, changing building to building and block to block.

Kacey Lizon, SACOG’s  Executive Deputy Director of Planning and Programs, was also on the tour, and noted how early activation activities had helped build the success of Reston Town Center. In 1990, the year it was first built, $3 million had been spent on programming activities to help the burgeoning development feel like a downtown. Creating that sense of place and being “obsessive about the pedestrian experience” had been key to its subsequent success, she said.

Setting the long-term vision for the Kammerer Road Corridor project is the first step to repositioning it as a 21st century employment center. Following that with an implementation plan later this year is the key next step for the City of Elk Grove, said Jordan.