Clearing the Air and Boosting Opportunity Clean Cars 4 All program offers up to $9,500 to replace dirty clunkers with electric vehicles 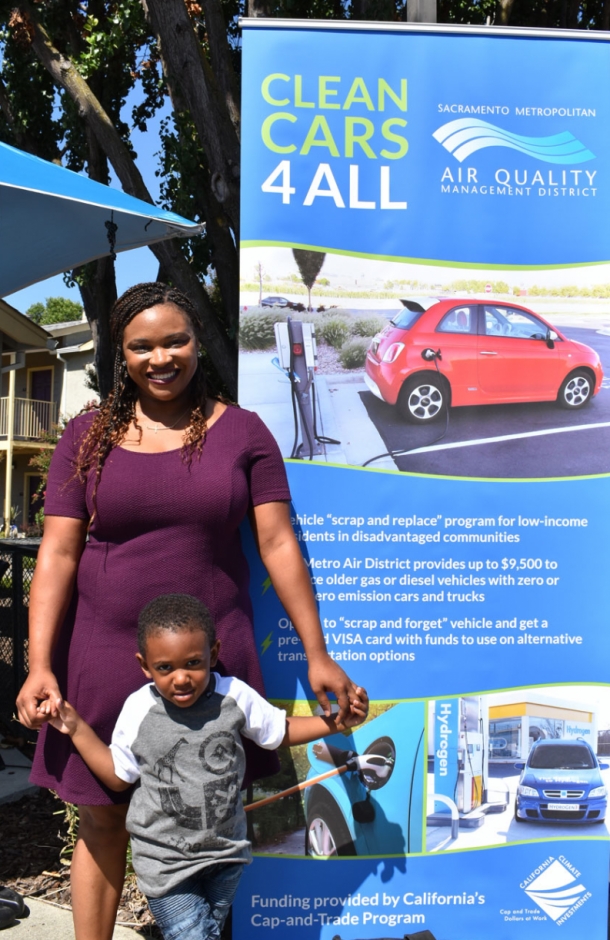 August 27, 2019: A program that replaces polluting older cars with electric vehicles will increase economic opportunity as it helps clean up our air.

Clean Cars 4 All had its media launch on August 7 and will be fully operational in 2020. The program, being run by the Sacramento Metropolitan Air Quality Management District (SacAQMD) using cap and trade funds through California Climate Investments, is aimed at low-income participants who own a car that is at least 15 years old.

Participants, who must be at or below 400 percent of the federal poverty level ($103,000 for a family of four), scrap their old car and can choose either the “Scrap and Replace” option or the “Scrap and Forget” program.  Scrap and Replace gives people up to $9,500 towards a new or near-new zero emission vehicle and up to $2,000 for charging infrastructure. The Scrap and Forget program gives people a Visa card loaded with $7,500 in credits that can used for a wide variety of innovative transportation options, such as on-demand micro-transit, car and bike-share programs, and Uber and Lyft, as well as public transit options.

This program not only improves air quality, it promotes economic opportunity and resilience for low-income people. At the launch, Victoria Robertson, the program’s first participant, talked about the economic insecurity that came with owning an unreliable older car, in her case, a 2003 Chevy Cavalier that she bought three years ago. Victoria depends on the car to get her to work and also uses it to supplement her income by driving for food delivery service DoorDash on the weekends.

“My AC went out, the only window that really works is the front passenger one, it’s got a small oil leak, and it’s started to overheat. I worried about it and prayed on it. What would happen if it broke down? My prayers were surely answered when I heard there was a program that would give me $9,500 to replace my car with a new or near-new zero electric vehicle. A reliable car is a big game-changer in my life.”

Alberto Ayala, Executive Director of SacAQMD, called the program “our downpayment … on sustainable, viable, clean-air solutions” and a “tangible example of cap and trade dollars working in our economy.” He said it was aimed at the people who needed it the most, “low-income communities that have been historically disadvantaged.”

Congresswoman Doris Matsui echoed that sentiment, saying “It shouldn’t cost low-income people a fortune to buy a car that saves them money.” She called the program a great example of many levels of government working together — federal, state and local — which was vital when it came to the “existential threat” of climate change.  “This is the moment we all have to work together, we have to be all in.”

The program’s $5 million in funding is expected to fund 300-500 vehicles and about 100 Scrap and Forget options. But SacAQMD staff suggested that if it went well, there were plenty of opportunities for funding to extend the program.