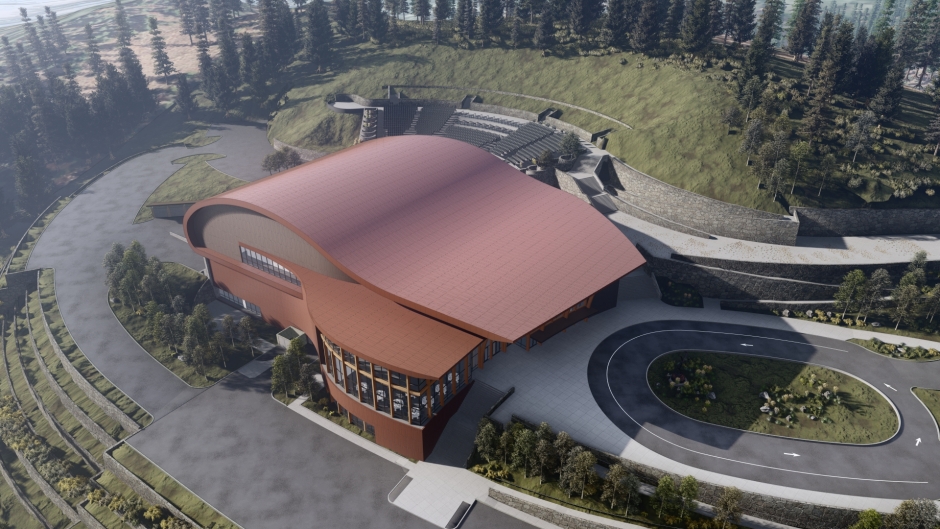 October 28, 2020: A large performing arts facility coming to Northstar at Tahoe plans to ban cars with fewer than three occupants. That is just one of the bold proposals that emerged from the Tahoe Mobility Forum, a one-day virtual discussion between academics, consultants, and public agency officials hosted by the Tahoe Regional Arts Foundation in September.

The foundation is behind The Stages at Northstar, a performing arts center scheduled to open in 2024 that will include a 2,500-seat outdoor amphitheater, a 650-seat main stage theater, a 150-seat “black box” theater, and a 150-seat community room. The center is expected to host more than 500 events a year, including about 20 summer events at the amphitheater. Those events will induce additional traffic, with about half of that projected to come from visitors from outside the Tahoe Basin region.

As Keith Vogt, the chair of the Tahoe Regional Arts Foundation explained, the venue plans to deny parking privileges to vehicles with fewer than three occupants. Attendees would receive a link along with their ticket purchase to a car-pooling app so that, for example, a couple driving from San Francisco could pick up another couple in Davis and would be able to park at the venue. Otherwise, drivers would be directed to one of three planned mobility hubs and then onto shuttles to the venue, perhaps electric vehicles.

This plan is despite the fact that one of the advantages of the venue’s  21-acre site at Northstar is that it is next to a 900-vehicle overflow parking lot for skiers. Vogt explained that the foundation’s focus is as much on helping to reduce vehicle trips within the Tahoe Basin region as it is on mitigating the congestion that would be caused by its own events. The project is aiming to be “net-zero” and Vogt said it was “community-oriented as a theater project. We’re part of the neighborhood, part of the community.” As such, it shared the community’s concerns about the environmental and congestion impacts of new projects.

Tahoe’s peak seasonal traffic woes are nothing new in a region that has 25 million visitors a year. As the report from the Tahoe Mobility Forum notes, “More than 50 million vehicle trips are made into, out of, and within the Basin annually, leading to extreme traffic congestion during peak times of the day, weekend, year, and for special events.” But as one transportation official noted to Vogt, “We’ve been dealing with this for 40 years and we still haven’t made much progress.”

Another strategy to keep vehicle numbers down that Vogt is keen to pursue is train service from the Bay Area to Reno. Currently that segment is available only through a once-daily Amtrak train but Vogt believes that demand from arts patrons could be the boost to demand that would make such a service feasible. Efforts to get people to take a train or carpool have traditionally had little success but Vogt said the high quality of the experience offered at The Stages at Northstar — both world-class performances and scenery — might be the key factors that drive demand for a “first-class” train operation. He’s betting on the quality of the experience being high enough “to motivate people to adjust their expectations of how they get here.”

He also sees the innovations as pilot projects for the rest of the Tahoe Basin region, essentially hoping to leverage those adjusted expectations to make it easier for other organizations and venues to duplicate the congestion-busting efforts. The report that summarized the vision articulated at the Tahoe Mobility Forum is a grab-bag of transportation strategies: “multiple modes of convenient, efficient transit” to get to Tahoe; “abundant modes of transportation within the Tahoe Basin, such as micro transit, pedestrian and bicycle lanes, electric buses and shuttles, zero-emission rideshare vehicles, and waterborne transit;” “consolidated real-time software and smartphone apps to make transit options easy to access;” “user fees or pricing;” “compact development;” “accessible VMT data;” and “equity in mobility for low-income workers, travelers, and residents.”

That vision lays out some lofty goals but Vogt said the foundation had “no grandiose idea that we can solve issues others haven’t.” Rather, it had decided to focus on two key congestion corridors: I-80 from the Bay Area to Truckee and SR-267 from I-80 in Truckee to Kings Beach on the north shore of Lake Tahoe, along which Northstar is located. He hopes that if the demand for The Stages at Northstar can be leveraged to make congestion-busting innovations successful, the region as a whole can build on that success to tackle the long-standing transportation issues it faces.

The Tahoe Mobility Forum will meet again in February 2021 to transform some of the recommendations in its initial report into near-term action plans. It could be a case of creative solutions being driven by a creative arts group.