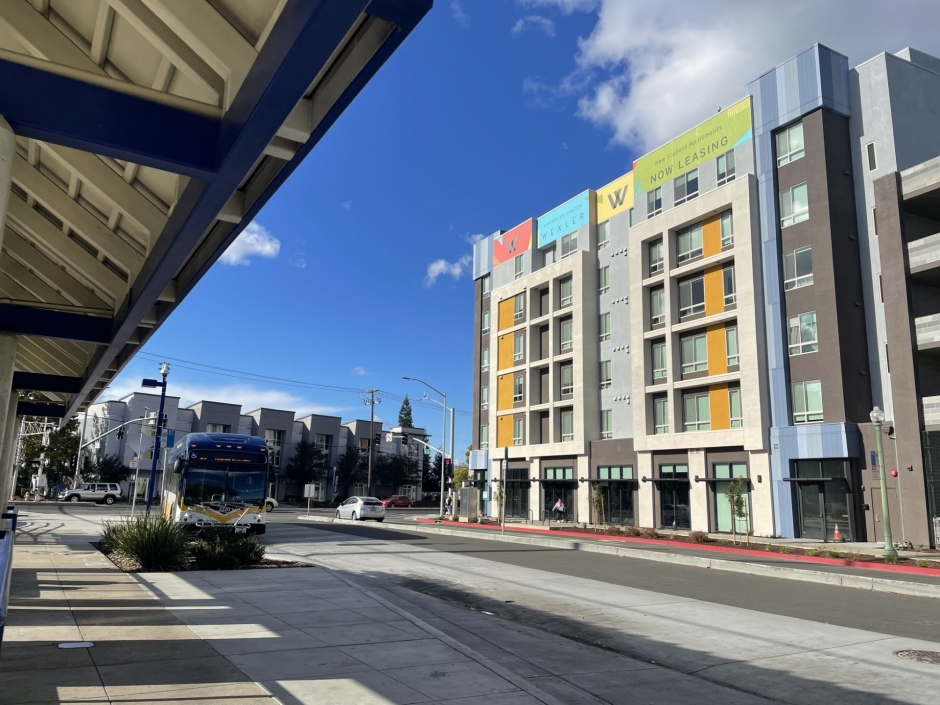 The following is a repost of a story shared on Sacramento Regional Transit’s website on November 17, 2022. You can view the original story here.

Years in the making, one of the most dramatic and unusual neighborhoods in the region is rising fast in a former industrial area next to Sacramento State University.

This is a fully fledged example of “transit-oriented development” in the Sacramento region – a neighborhood where cars are truly optional. SacRT has plans for many more similar transit nodes next to light rail stations around the county, each designed to represent the needs of its surrounding community.

They will be served by the recently opened Grocery Outlet supermarket, as well as restaurants, breweries, workout centers, cafes and other neighborhood amenities, including one hotel next to the light rail station, with another on the way.

The newest addition to the neighborhood is perhaps the most impressive piece of this buzzing neighborhood: The new Wexler apartments, will house 700 residents in two mid-rises directly overlooking the light rail station and transit center on land supplied by SacRT.

The Wexler project, designed mainly for university students, sits two blocks from the Hornet Crossing entrance to campus. A block north, the Academy 65 apartments housing several hundred students have been open now for more than two years. Two more nearby affordable housing developments totaling, more than 200 units, are making their way through the entitlement and planning process.

Jeff Harris, a SacRT board member and Sacramento City Councilman, who’s helped guide development, calls the area’s metamorphosis “one of the coolest things I’ve ever been involved with.”

“We get kids really plugged into their university; we get people using transit. It frees up low-income housing units (elsewhere), and lowers the vehicle miles traveled,” he said. “And, you’ve got beer and pizza. What more do you need?” 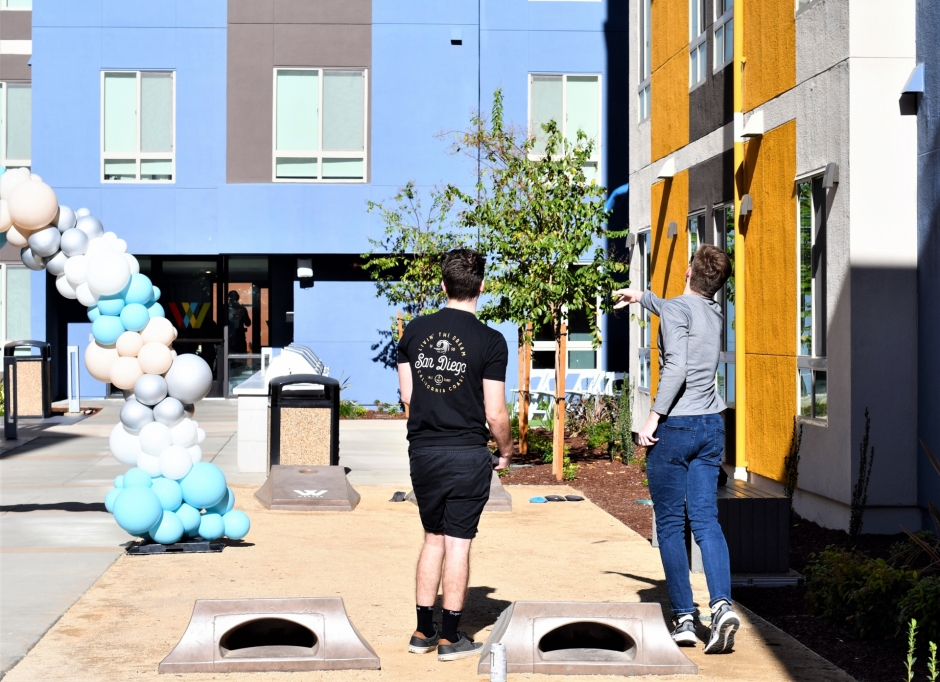 Sacramento State University President Robert S. Nelsen said the student village, its amenities, and light rail and bus transit center all in one package represents a major win for the region.

“Sac State is at the heart of a vibrant university community,” Nelsen said. “More and more students want to live as close to campus as possible. They want to dine and shop within walking distance of campus, but they also want to go downtown. Sacramento Regional Transit brings our worlds together.”

Transportation officials are cheering the TOD project, saying they hope it will encourage increased commitment in the region to denser village-style development around transit hubs.

The 65th and Folsom Boulevard transit village is expected to reduce congestion on nearby Highway 50 as well, because many students who formerly commuted daily to campus from around the region now will be living next door and walking and biking to school.

Those students will be able to take light rail and bus – using free student transit passes – to jobs and internships around the Sacramento region, including at the Capitol, and to technology and office centers in Rancho Cordova and Folsom.

Despite appearances, the new neighborhood did not happen overnight, however.

It took several decades of planning and coordinating among SacRT, Sacramento State, the City of Sacramento, property owners and local and national business interests.

SacRT and developers negotiated a critical deal two years ago to allow construction of the 65th East apartments on a former bus transfer hub next to the light rail station. As part of that deal, the developer built a new $2 million transit hub next to the station.

Stephen Siri, co-managing partner of The Martin Group, part of the Wexler apartments development team, thanked both SacRT and Sacramento State for being willing to join in a community-building project. “Building a project like this takes a village,” he said.

With the addition of the newest apartments, the 65th East project, to the neighborhood, SacRT officials say they now have a significant success to point to, to show other communities what transit-oriented development, or TOD, is all about, and what it can do to revitalize communities around light rail stations.

“Just seeing how (alive) this area is becoming is just amazing,” said Traci Canfield, SacRT’s Senior Manager of Real Estate and Transit-Oriented development. “We can finally point to this and say, ‘There is TOD.’”

“(SacRT CEO) Henry (Li) and I have been talking about transit-oriented development for a long time. There are many places we can do this,” she said. “We really believe in transit in this community. This is the reality of what we wanted to do and be for the longest time.”

SacRT has properties available for purchase next to other light rail stations as well. The goal is to develop lively communities of residents and businesses a few steps from train platforms. Each of them, ideally, would be designed to fit the needs of each individual neighborhood.

Where will TOD happen next in Sacramento?

The Broadway corridor is also going through a renaissance, with construction expected to start next year to convert Broadway from a commuter corridor to a community street by decreasing traffic and making it more transit, pedestrian and bike friendly. Two five-story buildings with 140 affordable-housing units and 3,500 square feet of ground-floor retail space are expected to be constructed next year across the street from the Broadway station.

Across the street from the Alkali Flat/La Valentina Station near Downtown, the Gateway Alkali, is proposed for the northwest corner of 12th and E streets. The five-story, 94-unit project would occupy what’s now an empty lot.

Rancho Cordova has plans for a large transit-oriented development called Mills Crossing Civic Center. It will be built across Folsom Boulevard from the Mather Field/Mills station, home of the Mills Station Arts & Culture Center. The project, on 10 acres, will have up to 66 townhomes, 60 apartments, a market, cafe, theater, park, as well artist studios, a business incubator space, a community health clinic, a day care center, adjacent to the existing Folsom Lake College center.

A 120-unit affordable apartment project, to be known as Salvador Apartment, is nearly complete close to the Royal Oaks light rail station. SacRT sold the land to non-profit Community Housing Works (CHW) with the goal of providing housing next door to light rail. Sean Spear, CEO of the CHW development company, said light rail will be key to getting residents to jobs. “We hope this vibrant community will also serve as a catalyst for neighborhood revitalization in North Sacramento.”

A half-mile west, at the Arden/Del Paso station, non-profit Bridge Housing a development company has proposed a five-story, 124-unit apartment with commercial space, possibly a child care center and a cafe, steps from the this major transit center station.

And a block from the Globe station, non-profit Volunteers of America have proposed a 75-unit housing project.

SacRT is teaming with Sacramento Housing and Redevelopment Agency (SHRA) and housing developers to build a new light rail station on the Blue Line along N. 12th Street in the River District to provide much needed connectivity for a major new affordable housing community partially open – called Mirasol Village – that will house more than 1,000 people. The new light rail station, called Dos Rios station is expected to open in late 2024.

SacRT and developers will build a new station on the Green Line in the downtown railyards to serve several large apartment complexes, a Kaiser Permanente Medical Center, a potential soccer stadium, offices, shops and entertainment venues.

The Township 9 station on Richards Boulevard is finally seeing development built up around it into a massive live-work neighborhood that includes state offices with several thousand occupants, as well as upscale riverside apartments and other neighborhood amenities.

SacRT and the Sacramento Municipal Utility District (SMUD) have agreements for a major transit village, called Sac59th, with a potentially relocated 59th Street station as the center of the project site. The proposal includes 108 single-family homes, 770 apartments, an event center, community pool, and child-care facilities.

SacRT has positioned itself as well to partner on TOD in several south Sacramento areas, notably at the Meadowview station. SacRT is interested in working with the community in creating a livable, transit-oriented neighborhood that will benefit not only transit users, but also the surrounding community.

Adjacent to SacRT’s newest light rail station, Morrison Creek, the Stone Beetland proposal calls for 1,160 homes on a 140-acre site just west of the station, The transit-oriented neighborhood would include denser housing closest to the station.

The City of Folsom is currently conducting a targeted multi-family and mixed-use housing study to evaluate design, density, and market feasibility for multi-family and residential mixed-use development along the East Bidwell Corridor, at the Glenn light rail station.