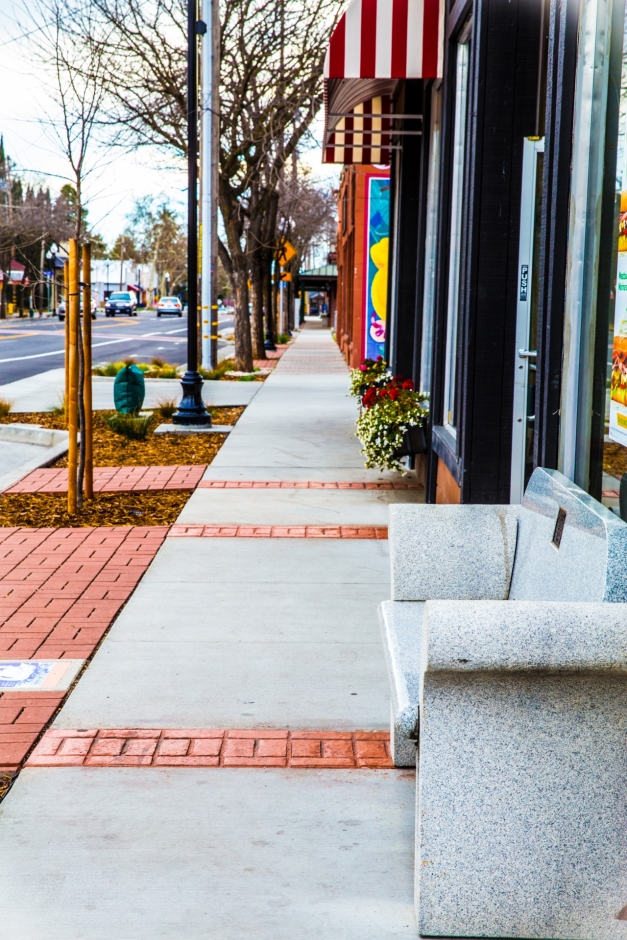 March 31, 2021: Despite the pandemic, Loomis’ downtown is thriving. Last April, a month into the Covid-19 lockdown, new bistro Reds’ opened in a space on Taylor Road that had been vacant for eight years and it is now a hot ticket. In the fall, a pair of 1988 grads from the local Del Oro High School opened an Ace Hardware in a former fitness studio that is now booming and bringing more foot traffic to Taylor Road. Loomis town manager Sean Rabé said that Ace’s corporate headquarters had predicted December revenue would be $45,000 but that actual revenue had been five times that at about $220,000. March is on track to beat even that number, Rabé said.

As Town Councilmember (and SACOG director) Jan Clark-Crets explained, Taylor Road’s location next to the railway lines had made it the epicenter of Loomis’ orchard and fruit-packing economy a century ago but it was in a period of stagnation when Rabé arrived as the new town manager in 2017. Two large former fruit-packing sheds had been converted into successful multi-use businesses, High-Hand Nursery and the Blue Goose Event Center but the street still had plenty of vacant storefronts and needed a facelift. The Town had just kicked off a SACOG-funded street-scaping upgrade project to connect and upgrade sidewalks from Horseshoe Bar Road to High-Hand Nursery, which was a catalyst to new businesses coming in. In a nod to the corridor’s history, the new sidewalks included tiles featuring old fruit-packing label art.

That renaissance was built upon in late 2017 when urban strategist Michele Reeves did a workshop on retail place-making tactics, which Rabé said really helped galvanize business owners along Taylor Road.

The Town complemented that work with grants to help retailers upgrade their storefronts and by participating with 11 other project teams in SACOG’s Civic Lab, focused on revitalizing commercial corridors.  One program was an $8,000 match to business owners and the other was a $3,500 no-match free grant with both structured as reimbursements to make sure business owners had skin in the game, as Rabé put it. He said almost all of Taylor Road’s 20+ businesses made storefront improvements and that the roughly $125,000 investment from the Town helped lead to about $1.6 million in private investment on Taylor Road in 2019. But money wasn’t the only grease; elbow grease played a part too. When the owner of the former Star Liquor shop wanted to repaint the front of the vacant building, he asked Rabé if he needed a permit for the much-needed refresh. Rabé assured him he didn’t and said, “I’ll get up on a ladder to help you roll it out.”

Rabé said that being a small and nimble local government had been a huge advantage, as was the trust his council had to give him flexibility in making deals. Another advantage is that the Town is a landowner on the Taylor Road corridor so it also has skin in the game and the ability to take its own action. And locals have been very supportive of their downtown businesses. Rabé said that attracting boutique businesses was also a winning strategy, as it not only represents the type of business growth the community wants, but also makes for landmark businesses that attract shoppers from beyond Loomis. High-Hand is the poster child of this and across the street from that is EyeChicks Eyewear, which Rabé said attracted customers from as far away as the Bay Area and Lake Tahoe.

Through SACOG’s Rural Main Streets program, Loomis is working with the Local Government Commission on a streetscape plan looking at walkable connectivity for future developments and Clark-Crets said she was “confident that all of us in leadership want to see Taylor Road become more walkable.” Loomis is also looking at how housing could help revive commercial corridors through a Rural Main Streets workshop, as well as other planning for housing. That workshop, coupled with a second Reeves workshop in 2020 that focused on the Town’s civic identity and the Town’s participation in year two of the SACOG Civic Lab program, has the Taylor Road corridor poised for even more revitalization. Clark-Crets said the second Reeves workshop was “really impactful. [Reeves] stressed the importance of coming together as a community to decide what our growth should look like.”

This year is a big one for the Town, which has just 13 staff. It is updating its general plan and working through legal issues in preparation for the arrival of Costco, which is expected to more than double the Town’s sales tax revenue and enable a lot of deferred road maintenance.

“That project will be a major boon for us,” said Clark-Crets. “We’ll finally be able to be proud of our roads.” And while she had her crystal ball out, she had one more hope for Loomis.

“If I could wiggle my nose and make any wishes, we’ve got all these beautiful rural roads and we need trails and bike lanes before much more development happens.”