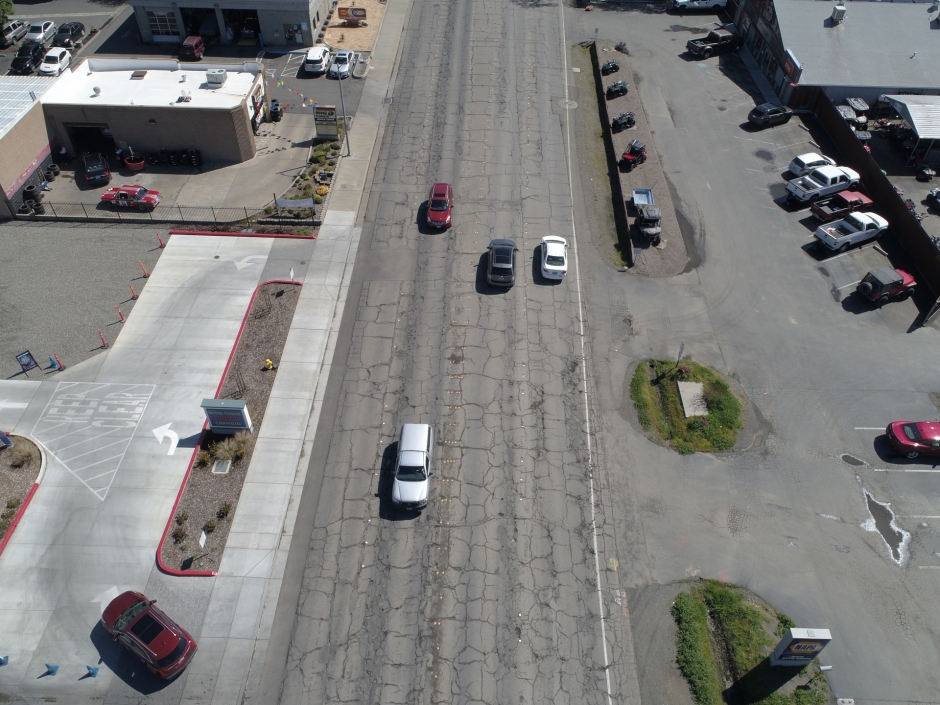 November 29, 2020: Next year Woodland will celebrate 150 years since being incorporated and it all started on Main Street. Since then the thoroughfare has stretched both west and east, adding West and East Main Streets. Now West Main Street gets a lot of traffic “dumped” on it because of a lack of connectors between Highway 113 and Main Street from the south, said Tom Stallard, Woodland’s mayor pro tempore. The combination of heavy traffic and some missing sidewalks and no bike lanes had made the busy street unwelcoming for people not in cars.

But the one-mile, mostly commercially zoned area of West Main Street, between West Street and County Road 98, has recently received a makeover transforming it into a street not just fit for cars, but also for cyclists and pedestrians. “For a beautiful city, this eastern entrance to our community was not very gracious.  We also have unscreened railroad tracks.  This project has reversed scores of years of neglect and brings this part of the community up to 21st century standards,” said Stallard.

The pavement had failed beyond repair and there were no bicycle lanes on West Main Street from West Street to County Road 98. In addition, there was a portion of the project with no sidewalks at all, intersections that did not have ADA corner ramps, and existing signals that were not programmed with bicycle/pedestrian timing for safe crossings. With the lack of sidewalks, pedestrians were forced to walk on the street or find a different path to get to their destination. Many people felt the roadway was not safe for bicyclists and pedestrians, leaving them with limited options.

The project brings with it a continued commitment to providing Woodland’s 60,000 residents with options on how to get around. By making it easier to walk and bike to and from a destination, or even walking to and from bus stops, residents have more freedom of choice for how they move around. What was once an area where residents didn’t feel safe on foot or biking, is now a fully improved roadway that has fresh new pavement, bike lanes, sidewalks, ADA ramps, and crossing signals that prioritize walking and biking. The project improvements are also poised to bring more foot traffic to businesses in the area and connect more people to downtown, opening the possibility for positive economic impacts in the community, including infill development.

The project is now complete and ready for use, with few minor items before the City closes it out. The project cost nearly $6.5 million and was funded through state, SACOG, and local funding sources.

“This project will inspire needed infill development as well as redevelopment of some tired areas, a problem common to older boulevards.  Woodland is very grateful for the SACOG commitment and role in this progress for our community,” said Stallard.