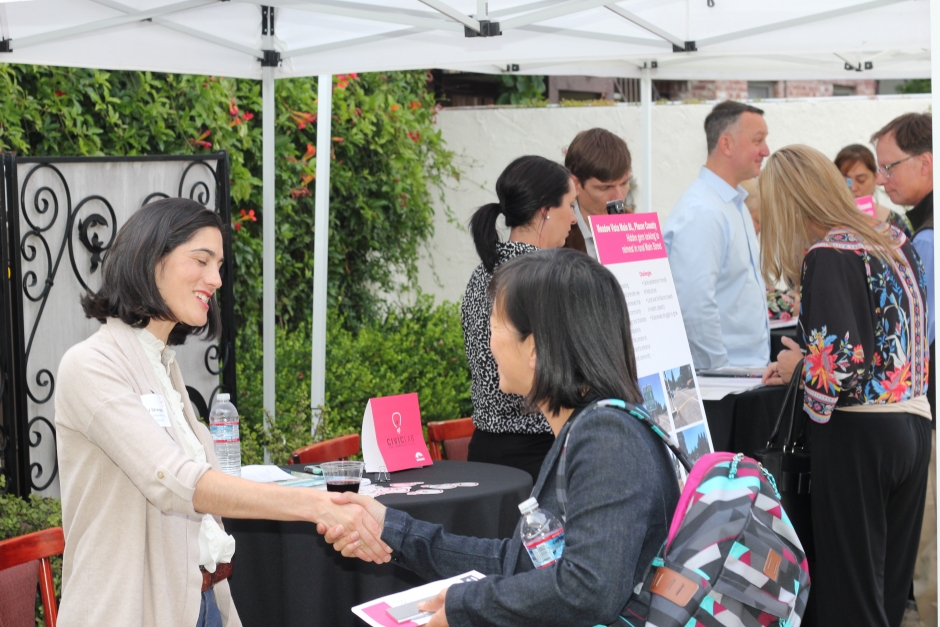 The teams have been assessing their commercial corridors, identifying the challenges they need to overcome to bring them back to life and honing their vision of how the corridor may develop.

The Civic Lab Marketplace event brought the 12 teams together with about 50 private sector partners, who had come from as far afield as Miami and New York. They spent the afternoon touring some of the corridors, with three tours visiting two sites each. Then in the evening each team delivered its pitch describing the challenges and vision, with the goal of drawing potential partners to their table where they could learn more about each other.

The set-up — nervous presenters looking to woo potential investors and partners with a two-minute pitch — was reminiscent of speed dating, which the final pitcher of the night, Stefan Heisler from the City of Rancho Cordova, played for comic effect.

“If I had to describe the City of Rancho Cordova, I’d say we are the suburban City with the biggest teenage crush on walkable urban development.

“You know what kind of development I’m talking about. She’s way above our league, tall, typically three-five stories, mixed use, she’s got several different interests, walkable, she’s totally into fitness, and has amenities and destinations around every block. We’ve been chasing her for years and we’re ready to make a catch … On top of that, we’ve recently gotten some professional dating advice through SACOG. And our parents are very supportive of the match, all five of them.”

The next step for the teams is to design a pilot project that could help revitalize their corridor, which could include working with one or more of the private sector partners they met at the Marketplace. To make this easier for teams, part of the Civic Lab program is to pre-qualify vendors. This enables them to go straight to contract with any of the teams and lets teams avoid having to jump through the time-consuming hoops of doing a Request for Qualifications for each service they may need. SACOG handles the process for both parties, making it simple-one-stop shopping.

The teams were excited to spread the word about the opportunities they see in their corridors and the vendors were happy to visit so many projects and meet potential partners in one event.

As Dominik Prinz from New York consultants cg42 said, “The whole day was so well organized and it was fantastic to experience both the cities’ challenges and opportunities first hand.

“We generally work with cities on a holistic level – and focus on feasibility studies, financial ROI analysis, and long-term economic strategies. If there is any need on either the city-level or the corridor-level, we’d love to explore a partnership as a vendor.”